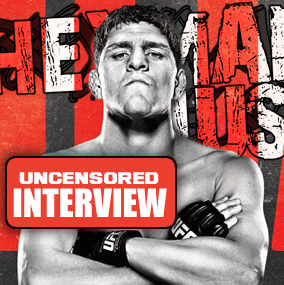 Nick Diaz has granted his first interview since his controversial loss via unanimous decision to Carlos Condit at UFC 143 and subsequent shocking announcement to Joe Rogan that he was quitting MMA because of the judging. The Stockton Bad Boy spoke with SPIKE’s debuting MMA Uncensored program, and some may wonder exactly why Nick agreed to do the interview in the first place.

When asked about a career in professional boxing, Diaz responded  “Well, I never said anything about pursuing boxing. I (haven’t) really said much about anything about what I’m gonna be doing in the future. I’ve had what feels like a week or so to think about any of this, but I haven’t really put much thought into it.”

It’s an interesting interview, because while Diaz really doesn’t touch on anything whatsoever, it’s classic Diaz doing what he does best. Just being himself.

Of course, we’re HustleTweeting about Nick Diaz’s first interview since UFC 143, and you’re more than welcome to join the conversation by following THE HEYMAN HUSTLE on Twitter HERE or write to us directly at hustleoncrave@gmail.com  Hey, have you checked out the Hustle’s Ultra High Quality You Tube Channel, with  exclusive videos featuring BROCK LESNAR’S “HERE COMES THE PAIN”  … ICE-T AND COCO’s SEX SECRETS … THE ULTIMATE WELTERWEIGHT BAD ASS NICK DIAZ … CONTROVERSIAL TEEN SENSATION TAYLOR MOMSEN … LEGENDARY MMA PIONEER FRANK SHAMROCK … THE WALKING RIOT MISSY HYATT … if you’re not subscribing, you’re missing something … and by the ways cheapos, it’s FREE! Yes, absolutely 100 percent FREE! What are you waiting for? Check it out HERE!

CHECK OUT THE NICK DIAZ INTERVIEW FROM SPIKE’S MMA UNCENSORED! 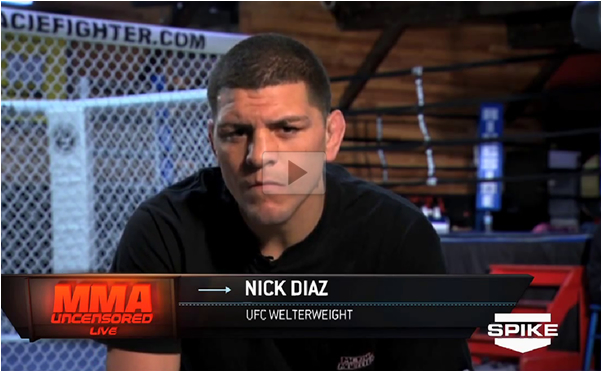