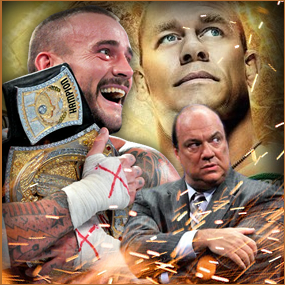 The relationship between our own Hustler De Tuti Hustlers Paul Heyman and WWE Champion CM Punk is front and center as John Cena returns to his hometown of Boston to challenge “The Best in the World’ for the Heavyweight Championship! 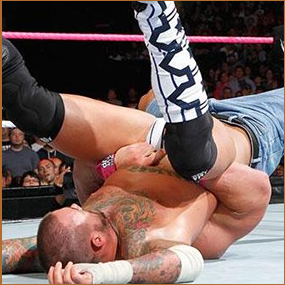 The relationship between our own Hustler De Tuti Hustlers Paul Heyman and WWE Champion CM Punk is front and center as John Cena returns to his hometown of Boston to challenge “The Best in the World’ for the Heavyweight Championship!

Claiming to just be a member of the WWE Universe, our own Hustler De Tuti Hustlers Paul Heyman appeared live at the TD Garden (formerly the legendary Boston Garden) to witness “The Best in the World” CM Punk defend the WWE Heavyweight Championship against Boston’s own John Cena on Sunday night, September 16, 2012.

In an article posted on WWE’s OFFICIAL WEBSITE, the controversy was described in detail:

WWE Champion CM Punk and John Cena used every tool in their respective arsenals as they battled to determine which Superstar was truly “Best in the World” in front of the Cenation leader’s hometown Boston crowd. Ultimately, it was Cena’s impressive top rope German suplex that would conclude this brutal bout. Yet, it wasn’t Cena’s arm that was raised in victory at the end of the night.

After Cena began celebrating what appeared to be his 11th WWE Championship victory, referee Chad Patton noted that Cena’s shoulders were also flat on the canvas as the Cenation leader had Punk in a pinned. As explained by ring announcer Justin Roberts, the match had officially ended in a draw … with CM Punk retaining the WWE Title.

CLICK HERE TO SEE WWE’s OFFICIAL PHOTOS FROM THE NIGHT OF CHAMPIONS PAY PER VIEW!

The smirk that Punk wore at the end of the night as he strode up the entrance ramp – WWE Title and Paul Heyman in tow – mirrored the one he wore at the beginning of the bout. Clad in first place New York Yankees–esque pinstripes to rile up the last place Boston Red Sox faithful in attendance, The Straight Edge Superstar set a deliberate pace as he kept his powerhouse opponent off his feet. By taking Cena’s size advantage out of the equation, Punk clearly surmised, the bout would be a manner of wearing Cena down before finishing him off with a Go to Sleep or his signature submission hold, the Anaconda Vise.

The tactic was working, inspiring guest commentator John “Bradshaw” Layfield to note that Punk was wrestling a “perfect match” and had gone into this bout with a thought-out game plan. Every time Cena tried to shift momentum, whether with a series of shoulder tackles or with his Five Knuckle Shuffle fist drop, Punk was seemingly one step ahead. Heyman, whose current association with The Second City Saint has yet to be revealed, looked on approvingly from ringside.

As Punk tried to wear down the challenger with submission after submission, it was Cena’s pure strength that helped the Cenation leader escape Punk’s holds, much to the delight of Cena’s family watching the action from the front row. Cena was not only driven by a desire to once again hoist the WWE Title above his head, but he was also determined to end Punk’s aggressive and dangerous quest for respect at any cost. Would that desire be enough, though?

Of course, we’re HustleTweeting about CM Punk and John Cena’s double pin at WWE Night of Champions, and you’re more than welcome to follow THE HEYMAN HUSTLE on Twitter HERE or write to us directly at hustleoncrave@gmail.com  Hey, have you checked out the Hustle’s Ultra High Quality You Tube Channel, with exclusive videos featuring OUR WORLD EXCLUSIVE WITH MIKE TYSON … BROCK LESNAR’S “HERE COMES THE PAIN” … ICE-T AND COCO’s SEX SECRETS … TEEN SENSATION TAYLOR MOMSEN … UFC BAD BOY NICK DIAZ … THE WALKING RIOT MISSY HYATT if you’re not subscribing, you’re missing something … and by the ways cheapos, it’s FREE! Yes, absolutely 100 percent FREE! What are you waiting for? Check it out HERE!

CLICK ON THE PHOTOS BELOW TO SEE WWE’s OFFICIAL PHOTO GALLERY
FROM THE CONTROVERSIAL 2012 EDITION OF “NIGHT OF CHAMPIONS!”