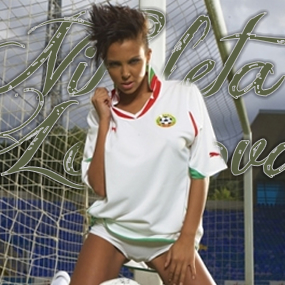 Forget Kate Middleton. The Hottest Bride of Twenty Eleven is Going To Walk Down The Aisle Pregnant!

Bulgarian Playmate Nikoleta Lozanova, who has been featured in some of the hottest pictorials ever on the Hustle HERE … HERE … and HERE has confirmed she will soon marry top sports star Valeri Bojinovi.

The couple, who recently moved to Lisbon and are expecting their first child, have scheduled the big day for October 15. The ceremony will take place at the town of Pravets near Sofia.Just a few days earlier Bojinov will play in Bulgaria’s soccer (football) euro qualifier against Wales, his first match for the national team for quite some time. He was recalled back after German Lothar Matthaeus was sacked as coach.

“The time has come for me to take this important step in my life and go to the altar. I am very happy. I am very happy that I am expecting a second child thanks to Nikoleta. She makes me insanely happy. I’m ready to get married and I want to do it only with her. I am aware that when you start a family things change and you get more responsible,” Bojinov said in an interview for 24 Hours daily.

The news and drama surrounding Nikoleta’s pregnancy and the upcoming wedding will deal another blow to Bojinov’s former long-term partner and mother of his child Alisia, who officially announced their separation at the end of October last year.

According to relatives, after Bojinov left her, the pop folk diva Alisia has been very depressed and has limited her public and professional appearances. Her parents and brothers are helping her raise their son, Valeri Jr.

After Bojinov joined Sporting Lisbon on a five-year contract from Parma, Nikoleta did not hesitate to arrange their life as it would suit her best and he was more than happy to serve her whims, local media say. Uh oh. Sounds like someone is taking control rather quickly.

The couple has picked a luxurious, two-story house with a garden and a pool in Lisbon, near one of the modern symbols of the city – Vasco da Gama bridge. In addition, they use the services of a chef, a gardener and a man to maintain the pool. Ah, the good life! What Hustlers!

Of course, we’re HustleTweeting on the wedding, and you’re more than welcome to join the conversation by following THE HEYMAN HUSTLE on Twitter HERE or write to us directly at hustleoncrave@gmail.com