No Country For Old Bond Villains 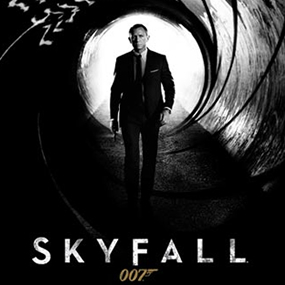 He Thrilled Audiences with His Chilling Performance as Anton Chigurh in “No Country For Old Men” … but now Javier Bardem Steps Into The True Role of a Lifetime … as a Bond Villain in “Skyfall!”

Javier Bardem is back, and he has a really F’D-up hairdo. That’s a sign of greatness, as he had a really F’D-up hairdo in the Coen Brothers‘ No Country For Old Men … but this time he’s not battling Tommy Lee Jones, or Woody Harrelson … his name is Silva, and he’s going to prove that BATMAN VS BANE has nothing on Silva’s battle against Daniel Craig’s James Bond!

In the teaser trailer for the movie, we learn that there’s a “New Q,” played by Ben Whishaw, and that Bond appears to be “killed in action,” with M (the always-awesome Judi Dench) typing up his obituary. We also see Ralph Fiennes‘ character Gareth Mallorygetting on M’s case for losing a disc drive that contained details of undercover British agents. More hints to the plot are offered in scenes depicting an explosion at intelligence agency MI6’s Thameside HQ and a Tube train plummeting into an underground vault. This great teaser trailer revealed other previously unknown plot points, one of which appeared to have been drawn from Ian Fleming‘s book ‘You Only Live Twice.’ The 1964 novel concluded with an obituary for Bond written by M after the secret agent was believed to have been killed during a mission in Japan.

The film will be released in the United States on November 9th. You can always travel abroad to the UK to catch it early, as it will be released in 007’s home country on October 26th. “Skyfall” marks Daniel Craig‘s third performance as James Bond, and we’re HustleTweeting about it right now. Please feel free to join the conversation by following THE HEYMAN HUSTLE on Twitter HERE or write to us directly at hustleoncrave@gmail.com  Hey, have you checked out the Hustle’s Ultra High Quality You Tube Channel, with exclusive videos featuring OUR WORLD EXCLUSIVE WITH MIKE TYSON … BROCK LESNAR’S “HERE COMES THE PAIN” … ICE-T AND COCO’s SEX SECRETS … TEEN SENSATION TAYLOR MOMSEN … UFC BAD BOY NICK DIAZ … THE WALKING RIOT MISSY HYATT if you’re not subscribing, you’re missing something … and by the ways cheapos, it’s FREE! Yes, absolutely 100 percent FREE! What are you waiting for? Check it out HERE!