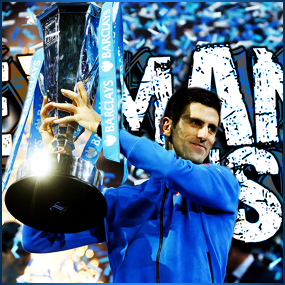 Djokovic closes out 2015 with a very personal victory!

Novak Djokovic avenged his defeat at the hands of Roger Federer (you can check out full coverage of that amazing match HERE) by beating Federer in straight sets, securing a fifth season-ending championship, in his15th final from the 16 events he entered in 2015. Big-serving Croat Ivo Karlovic was the only man who managed to deny him a berth in a final all season. He did so in the Doha quarter-finals.

“I guess Karlovic is my nemesis. I have a negative score against him. I have to talk about him before Doha next year,” Djokovic grinned. “It’s been an incredible season. Other than that tournament, I’ve played all finals. Obviously, sitting here with this trophy alongside me, I couldn’t ask for a better finish to the season. The last four years I managed to win the (Barclays ATP) World Tour Finals, where the best players in the world are playing. For some reason or another, I’ve been playing some of my best tennis after the US Open, in Asia and also indoors, both Paris and London.”

The Number One Seed in the entire world continued, “I’ve been trying to really pay as equal attention to the work and the recovery, as well, mental and physical. It allows me to have the longevity. It allows me to have the matches and the tournaments I’ve had in the last couple years. But this season definitely stands out. I can’t say I expected it, not at all … (It) obviously gives me a lot of confidence for anything that is coming in the future.”

Of course, we’re HustleTweeting about Djokovic vs Federer, and you’re more than welcome to join by following the Hustle on Twitter HERE or write to us directly at hustleoncrave@gmail.com Hey, have you checked out the Hustle’s Ultra High Quality YouTube Channel, with exclusive videos featuring the #HUSTLEBOOTYTEMPTATS SUPERMODEL OF THE YEAR … OUR WORLD EXCLUSIVE WITH MIKE TYSON … BROCK LESNAR’S “HERE COMES THE PAIN” … ICE-T AND COCO’s SEX SECRETS … MMA BAD BOY NICK DIAZ … the list goes on and on, so if you’re not subscribing, you’re missing something … and by the ways cheapos, it’s FREE! Yes, absolutely 100 percent FREE! What are you waiting for? Check it out HERE!