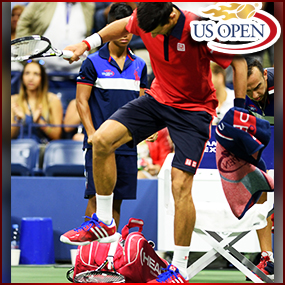 In a match that our own Hustler De Tuti Hustlers Paul Heyman called a “WAR” the top seeded tennis player in the world overcame a momentary hiccup and is cruising straight into a showdown with his arch rival Roger Federer!

Novak Djokovic defeated Roberto Bautista Agut tonight, advancing to the quarter finals of the US Open, but not before the audience at the Arthur Ashe Stadium in Queens, New York City witnessed a most memorable game. If for no other reason, it was shocking because  Djokovic, who hadn’t lost a set in his first three matches, suddenly lost control of his game in the second set, and it appeared as though Bautista Agut was mounting one of the most remarkable comebacks and upsets in tennis history. Djojovic eventually regained his composure, and won 6-3, 4-6, 6-4, 6-3. “It was a great match tonight,” Djokovic said. “I had a chance to close him out, and I didn’t capitalize, so he turned it around and make it tough. Credit to him.”

The win put Djokovic into the quarterfinals of a Grand Slam for the 26th consecutive time, just one behind Jimmy Connors and third behind arch rival (and number two seed) Roger Federer‘s record 36.

The match lasted just over three hours, and Djokovic appeared to have it well under control when he led by a set and a break, with points to add an insurance break. But Bautista Agut, the No. 28 seed, survived the seven-minute service game to hold and remain within striking distance at 3-4.

Bautista Agut then mounted a stunning attack, chipping away at Djokovic, hitting winning shots against the superstar, mostly off the forehand wing that Djokovic stubbornly kept attacking. Bautista Agut hit 22 forehand winners in the match, five more than Djokovic.

“I think there were several moments in which I managed to rattle him, making him uncomfortable on the court,” Bautista Agut said, with great accuracy, like his shots tonight.

By the start of the third set, many were comparing the Bautista Agut’s surge with the astonishing performance Fabio Fognini produced in his upset of Rafael Nadal two nights earlier.

“Obviously, at that moment it wasn’t easy, but I managed to regroup,” Djokovic said, “and use the experience of facing these particular situations before in my life, knowing what to do next.”

Djokovic broke him early and coasted through the set. Bautista Agut fell behind early in the fourth set. He rallied again to reach 2-all, but Djokovic hit another gear and rolled to victory.

And the anticipation for yet another showdown with Federer continues to grow.

Of course, we’re HustleTweeting about Novak Djokovic, and you’re more than welcome to join the conversation by following the Hustle on Twitter HERE or write to us directly at hustleoncrave@gmail.com Hey, have you checked out the Hustle’s Ultra High Quality You Tube Channel, with exclusive videos featuring the #HUSTLEBOOTYTEMPTATS SUPERMODEL OF THE YEAR … OUR WORLD EXCLUSIVE WITH MIKE TYSON … BROCK LESNAR’S “HERE COMES THE PAIN” … ICE-T AND COCO’s SEX SECRETS … MMA BAD BOY NICK DIAZ … the list goes on and on, so if you’re not subscribing, you’re missing something … and by the ways cheapos, it’s FREE! Yes, absolutely 100 percent FREE! What are you waiting for? Check it out HERE

I don’t know how many of you are watching the #USOpen2015, but @DjokerNole is in a WAR with @BautistaAgut. #HighDrama #BestInTheWorld