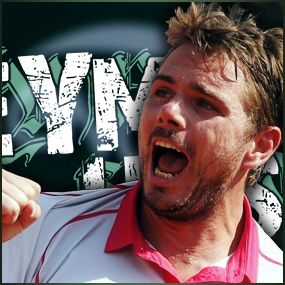 … plus footage of what is undoubtedly “the shot of the year!”

The number 8 seed for the French Open, Switzerland’s Stan Wawrinka won the second Grand Slam title of his career as he beat the number 1 seed, Novak Djokovic 4-6, 6-4, 6-3, 6-4 and in the process prevented Djokovic from winning the “career Grand Slam.”

Djokovic had looked nearly unbeatable for much of 2015, but after losing the first set, Wawrinka showed the world how to beat him. He ran Djokovic. considered by many the best conditioned tennis player in the world, so much that he made him look tired at times. No one has ever seen that before. And it’s not because Djovick is slowing down. He was run down.  And he hit his famous one-handed backhand as well as ever.

Towards the end of the third set, he was pulled out wide and used that backhand to hit a shot that twitter immediately deemed “the shot of the year.” We have that video for you, which we bet any tennis fan will watch (and marvel at) over and over again.

#SCTop10 without a doubt RT @rolandgarros: Shot of the year? @stanwawrinka #RG15 https://t.co/9Ab4ITP6JK

If Djokovic had won, he would have become the eighth man to win the “career Grand Slam,” which is winning all four Slams at least once. Only seven men have done it: Roger Federer … Rafael Nadal … Andre Agassi …  Fred Perry …  Rod Laver …  and Don Budge.

Of course, we’re HustleTweeting about The French Open, and you’re more than welcome to join the conversation by following The Heyman Hustle on Twitter HERE! You can also post your thoughts on our Facebook page HERE!  If you feel compelled to write us, please do so at HustleOnCrave (at) Gmail.com