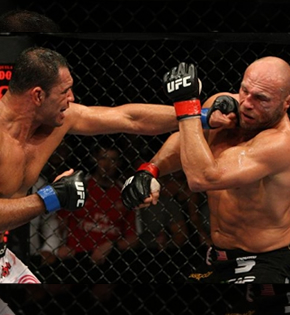 Randy Couture and Antonio Rodrigo Nogueira tore the house down in Portland, Oregon on Saturday night with an old school slugout that left both men beaten, battered, and worthy of fan worship.

Although Nogueira, who showed his loss to Frank Mir was due to hiding a series of injuries, was the dominant fighter who won via unanimous decision, Couture emerged an even bigger legend than before
the fight.

At the UFC 102 postfight press conference, UFC confirmed Couture had signed a new six-fight, 28-month agreement, which replaced his existing contract. Couture’s loss to Nogueira on Saturday night was the first confirmed fight of his new deal. The prior agreement would have had had one fight remaining on it after this fight. After an 11-month absence stemming from his walking out on UFC because of Dana White’s inability to sign Fedor Emelianenko, Couture signed a three-fight deal in September 2008. Despite losing the title to Brock Lesnar and this loss to Nogueira, Couture is still considered one of the biggest attractions in the Ultimate Fighting Championships.