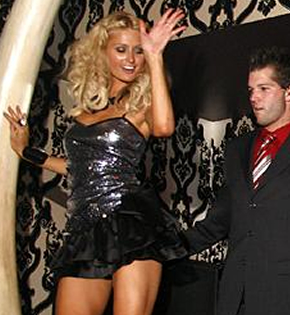 Paris Hilton gave clubgoers at Prive Las Vegas plenty to gossip about when she joined Andre Legacy and Dirt Nasty (aka Simon Rex) on stage for a rendition of the celebrity parody song “Droppin’ Names.”

The celebutant was on a whirlwind tour of all the hot Vegas nightspots with on-again-off-again boyfriend Doug Reinhardt, who appears to be “on again.”

Of course, Paris’ appearance at Prive was not without controversy.

“Peepshow” star Shoshana Bean touched off a media frenzy when she said she ran into a woman who appeared to be, in Bean’s eyes, embarrassingly wasted over the weekend. The woman, according to Bean’s Tweet, turned out to be Paris Hilton. That tweet has since been removed. Oh, but there’s more.

Robin Leach reported the tweet in full from Bean as reading “@ Prive exiting bathroom, blonde girl surrounded by people, can barely stand We step aside she comes in. Paris Wasted.” Leach refers to the tweet on his blog but has also deleted the full content from his Twitter account.

WHEN IN PARIS, UM …
OH, THIS ONE WILL GET US IN TROUBLE.
OK, CLICK ON THE PICS BELOW FOR THE ENTIRE GALLERY!
(This caption was approved by our lawyers)

AND NOW, LADIES AND GENTLEMEN, FOR YOUR
READING PLEASURE … AND YOUR PLEASURE-READING,
IT’S HOLLYWOOD CHARLIE’S 15 SEXIEST STORIES OF THE DAY.
JUST CLICK ON ANY PIC-LINK AND YOU’LL THANK US FOREVER!