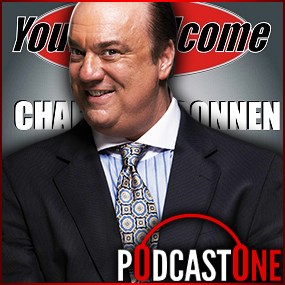 The Hustler Meets The Gangster on Podcast One!

Without hesitation, Sonnen and Heyman get right into it. The pair kick-off the show by addressing the swirling rumors about a potential WrestleMania match between Brock Lesnar and “Stone Cold” Steve Austin. Heyman also explains how he got a leg up the WWE, the many projects he has in the works, and his thoughts on why Roman Reigns struggles at the top of WWE.

Heyman, known in his early wrestling days as Paul E. Dangerously, is an accomplished entrepreneur in business, publishing and entertainment. He was an owner and the creative visionary of Extreme Championship Wrestling (ECW) from 1993 until its closure in 2001. In 2002, Heyman took on the role of a lifetime as the manager of Brock Lesnar, the biggest star in both the UFC and WWE.  He authors the “Heyman Hustle” digital blog, and co-owns the Looking4Larry Agency in New York City. Heyman was named one of Advertising Age’s Top 100 Global Marketers and is considered one of the most influential figures in professional wrestling.

Also on the show, Chael shares the moment last week when he and his wife welcomed their son, Thero, into the world.

“You’re Welcome,” the hottest podcast in MMA, drops every Wednesday at 12:30 p.m. ET. Chael’s 60-minute segments always feature the most popular, most exciting figures in combat sports and entertainment. Visit www.podcastone.com/chaelsonnen for the entire catalogue of Chael’s star-studded interviews and news in “You’re Welcome.”

Of course, we’re HustleTweeting about the “You’re Welcome” Podcast, and you’re more than welcome to join the conversation by following The Heyman Hustle on Twitter HERE! You can also post your thoughts on our Facebook page HERE!  If you feel compelled to write us, please do so at HustleOnCrave (at) Gmail.com