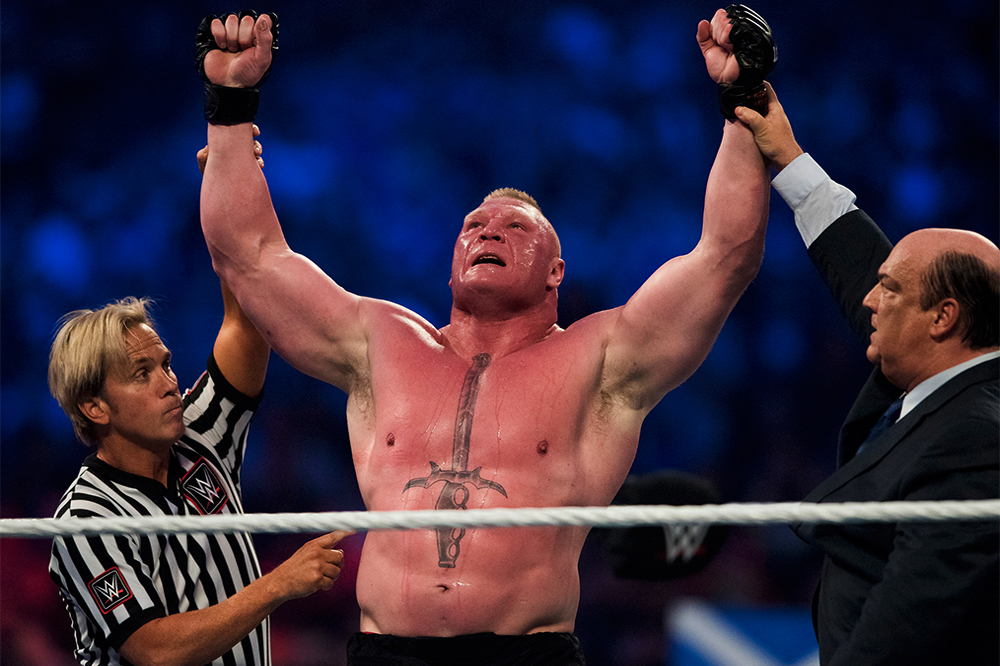 Our boss Paul Heyman faced the media this past week in promoting Brock Lesnar on the cover of the WWE 2K17 video game, and one of the most fascinating interviews took place with Brian Campbell of ESPN.

In that discussion, Paul covered a lot of ground regarding Brock’s decision to return to the Octagon for UFC 200, and how that separates Brock from everyone else on either the UFC or WWE rosters.

ESPN: Lesnar is often billed as the unbeatable beast of the WWE. The question most people have is whether the gimmick still works if he loses at UFC 200?

You’ve known McMahon a long time. Considering recent events like Lesnar being allowed to compete at UFC 200 and WWE signing talent from competing promotions like A.J. Styles, how has his perspective of the business changed?

I think Vince McMahon’s perspective changes several times per day and it has to if you want to survive in today’s constantly changing environment. I think the entire concept of the WWE Network is indication that Vince McMahon’s perspective is constantly changing because it has created a completely different business model for WWE itself. Does Brock walking between the two worlds serve as Vince McMahon’s acceptance to change? I think Vince has always been willing to change. His whole goal when he bought out his father was to completely change the perception and distribution and the marketing and the promotion of this industry. I can’t say that what Brock Lesnar is doing is indicative of anything regarding Vince McMahon because the only two people who know of Vince’s acceptance of Brock walking between the two worlds are Brock and Vince because those are the two that had the conversation about this.

If Lesnar decides to keep fighting in the UFC, do you see a scenario in which he could hold titles in both UFC and WWE at the same time?

I don’t make any predictions regarding Brock’s viewpoint in terms of competing in the UFC after July 9. I know that Brock really wanted to have a training camp and really wanted to step into the Octagon and have fun competing because to him that’s the greatest feeling in the world. He’s a born competitor. He’s not giving up WWE to do this. Could he hold the UFC and the WWE world championship? Absolutely he can and he’s the only being on the face of the planet who could possibly even consider making that accomplishment happen.

Considering Lesnar’s success competing in both worlds, do you see any other athlete in WWE or the UFC with the potential — competitively and commercially — to do the same?

The short answer to that is no. The long answer is that this is one of the things Brock Lesnar discussed at length with 2K Sports when they wanted him to be the cover art for “WWE 2K17.” When the game comes out you’ll see that Brock wanted his name attached to something that’s unique, different and extraordinary. I have all the respect in the world — more so than most would ever believe — for John Cena, for example. But John Cena could not main event WrestleMania, main event SummerSlam and then walk into the Octagon in true heavyweight competition against another heavyweight UFC fighter. Nor could Conor McGregor, the biggest box office attraction with the exception of Brock Lesnar in UFC, go from a UFC fight and then transfer over to do all the hype, all the television, all the publicity going into a WWE pay-per-view event and then continue to perform at the top level of sports entertainment. It just can’t happen. Ronda Rousey can make an appearance at WrestleMania. But can she work a full schedule to promote WrestleMania and then get into the Octagon and fight Holly Holm or Miesha Tate? The fact is you can’t expect them to. It would be unrealistic to expect them to. This is something not even Vince McMahon or Dana White could pull off. What makes Brock Lesnar different is that there’s nothing I say about him that’s simply hype. My job is to hype him, but there’s nothing I say that isn’t rooted in reality. There is one being on the face of the planet that could possibly pull this off and his name is Brock Lesnar.

Would it matter if McGregor were a Heyman guy?

You were famously part of the writing team during the days of the “Smackdown Six.” Which superstars within the company do you see that SmackDown could be built around in the upcoming draft?

I think one of the biggest components of this draft is going to be the NXT factor. You are going to have a whole bunch of new opportunities for people to move up into the main event mix just by the very nature of Raw and Smackdown having an exclusive roster. As we saw with the debut of The Shield a few years ago, you can get a lot of people into that mix very, very fast if they seize the moment of the opportunity which is given to them. I can’t actually sit here and tell you that I was a fan of the whole new era concept, but in my opinion the new era does begin on July 19 because, from the indications that I have received, the desire is to have true competition between the two brands.

How important will it be for SmackDown to feel special again once it goes live on Tuesday nights?

I think it’s paramount. SmackDown has to come across as a brand that is truly competing with Monday Night Raw. If the brand is not competitive with WWE in terms of talent, production, look, presentation — just in terms of the manner in which the announcers get to describe the product — it’s doomed. But I don’t see it going down that way. Vince McMahon is not known for doing things half-ass and I’m sure that the directive within WWE is that as of July 19 when this brand split happens there will be an equal and distinctive roster on each side and that they are going to compete. Vince, much like Brock Lesnar, thrives on competition. Just like he did in 2002, when there is no one out there competing with Vince McMahon, he will create his own competition.

As far as new talent coming into WWE, who would you like to see Lesnar compete against?

Obviously, whoever holds the WWE world heavyweight championship. Once you get past that, just look at the NXT roster and you’ll see guys like Samoa Joe and [Finn] Balor and all this talent that is coming up and about to break into the main roster. I would love to see these guys. I would love to see modern-day Brock Lesnar against modern-day Randy Orton. And I still don’t think the public is tired of seeing Lesnar against John Cena.

Which NXT talent do you believe is destined for big things on the main roster?

I think Balor is ready to be a main event superstar. I think Samoa Joe has always been a main event superstar. That NXT roster is filled with A-listers who are ready to move up and make a significant impact on both Raw and SmackDown. You seriously take a look and you realize how well positioned WWE is for this draft because there is so much talent in NXT. To go even further, NXT is practically guaranteed to lose not only its top tier, but particularly its top 1-A tier in this draft (or six months after the draft). Yet nobody in NXT is sweating this because the depth is so deep with A-level talent right now.

Given Roman Reigns’ recent suspension for violating the WWE’s wellness policy, what is some advice that you would give him?

I don’t know any better advice I can give someone than to say I make no excuses and I own this. That’s called accountability and it’s the same thing I teach my children. The man took accountability for his actions.

Do you have any information regarding whether you will be accompanying Lesnar to the Octagon at UFC 200?

[Heyman laughs.] What purpose would I be serving if I were to accompany Brock Lesnar to the Octagon? Will I tell him to throw more jabs? Will I tell him to go for the takedown now or switch to the jiu-jitsu concept? I find it funny that there is all this speculation. I wish I could find a purpose to serve to go out with Brock. It will be very funny for me to watch him walk down the aisle without me, but until I find a genuine purpose for me to accompany him I really don’t know in what capacity I could serve to help him win that fight.

There’s a ton more in this most revealing interview, so head on over to ESPN to check out the rest.