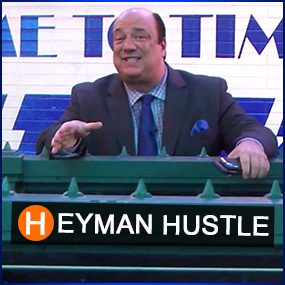 It was supposed to be the HUGE ANNOUNCEMENT ABOUT BROCK LESNAR for #WWE2K16. It turned out to be the wildest, most EXTREME episode of the Hustle ever!

The big news? Paul Heyman has officially confirmed Brock Lesnar Will Be in #WWE2K16! But the announcement didn’t go as smoothly as we had wanted. “Paul wanted to make the announcement from the rooftop of The Looking4Larry Agency,” explained our own Antoni J. Abbassio. “But the NYPD had shut down all traffic in Times Square, which was not only surreal, but quite inconvenient for Paul and the big announcement!”

Antoni continued, “so Paul turned to our award-winning camera man Jake Baumer and said lets hit the streets which is wild because it’s four blocks to our office … in the middle of Times Square … on SummerSlam week … and Paul gets mobbed anyway … but this was going to be insane!”

Of course, we’re HustleTweeting about Brock in #WWE2K16 as well as Paul Heyman Live in NYC, and you’re more than welcome to join the conversation by following the Hustle on Twitter HERE or write to us directly at hustleoncrave@gmail.com Hey, have you checked out the Hustle’s Ultra High Quality You Tube Channel, with exclusive videos featuring the #HUSTLEBOOTYTEMPTATS SUPERMODEL OF THE YEAR … OUR WORLD EXCLUSIVE WITH MIKE TYSON … BROCK LESNAR’S “HERE COMES THE PAIN” … ICE-T AND COCO’s SEX SECRETS … MMA BAD BOY NICK DIAZ … the list goes on and on, so if you’re not subscribing, you’re missing something … and by the ways cheapos, it’s FREE! Yes, absolutely 100 percent FREE! What are you waiting for? Check it out HERE

PAUL HEYMAN GOES LIVE ON THE STREETS ON NEW YORK AS HE TRIES TO MAKE THE BIG ANNOUNCEMENT ABOUT BROCK LESNAR IN #WWE2K16!