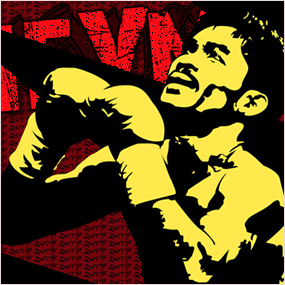 As The Circumstances Surrounding The Judges’ Decision Gets More and More Complicated, Our Own Hustler De Tuti Hustlers Shared His Conspiracy Theory on The Pac Man’s Split Decision Loss!

Just a week after PAUL HEYMAN POSTED A TWITTER RANT TO THE NEXT GENERATION OF SPORTS ENTERTAINMENT SUPERSTARS, our own Hustler De Tuti Hustlers was at it again, this time sharing his thoughts on the wild set of conspiracy theories coming out of Manny Pacquiao’s controversial split decision loss to undefeated Tim Bradley Jr in the main event of Bob Arum’s Top Rank Boxing promotion’s pay per view.

Conspiracy theories surrounding Pacquiao’s controversial split decision loss to Bradley in their World Boxing Organization welterweight title fight in Las Vegas over the weekend are continuing to gather momentum, with many accusing Arum as the alleged culprit. With Pacquiao’s contract with Top Rank ending in 2013, some have theorized Arum arranged for the judges to see the fight in favor of Bradley, to leverage Pacquiao in case the boxer wants to negotiate with another promoter.

Another conspiracy theory is that Arum will never make the deal with FLOYD MAYWEATHER JR, and simply wants to have Pacquaio’s rematch with Bradley as his biggest drawing card for the foreseeable future.

With all these conspiracy theories floating around, our HustleTweeters have been clamoring for Paul’s take on the situation. You are more than welcome to join the conversation and offer your opinions on the fight by following THE HEYMAN HUSTLE on Twitter HERE!

For everyone asking about the @MannyPacquiao vs @TimBradleyJr controversy, here’s my thoughts …

While I think this is clearly another case of piss poor judges … I would label this a “controversy” and not a “debacle”
Was it a “ripoff” to @MannyPacquiao? Yes, but not as much of a ripoff as people are saying. Here’s why
While @MannyPacquiao didn’t get his ass kicked, he also didn’t measure measure up. Manny looked heavier than usual …
… and he did get slower and slower as the fight went on. Did he put on a great effort? Yes, he most certainly did. Did he win the fight?
Yes, @MannyPacquiao should have been declared the winner. So why wasn’t he? Well, here’s my conspiracy theory …
Simply put, between his eroding skills, and lack of true dominance, @MannyPacquiao just wasn’t “Pac” anymore.
@MannyPacquiao was, still, better than almost anyone, but what judges saw was a fairly competitive fight
… between an obviously aging, almost over the hill legend and a kid whose ass that legend couldn’t really kick.
@FloydMayweather would have knocked out “last night’s @MannyPacquiao” within 5 rounds. And THAT’s what the judges saw.
That’s just MY opinion,for whatever its worth (which could be “nothing”).YOUR conspiracy theories,as always,most welcome here on the Hustle!
EXACTLY!!! RT: @Mike_Scalise if you put the other guy on the canvas for a ten count, the judges can’t “screw” you. #finishthefight
A decisive kayo of RICKY HATTON?!? RT: @Serrels When’s the last time Mayweather really ‘knocked out’ anyone? And Ortiz in no way counts.
@DCookie16 … I don’t see any theory from you. So what’s YOUR theory?
I’m not advocating the position that @MannyPacquiao deserved to lose, or that he DIDN’T fight a better fight.
I’m offering an opinion on WTF happened. Lots of conspiracy theories out there. This one is mine.
WHAT’S YOURS?