360 Coverage of WWE SummerSlam Week: Paul Heyman Says "Brock Lesnar vs CM Punk Will Be Worth The Price of Admission Alone" 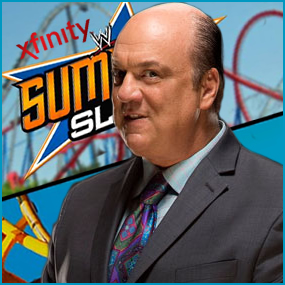 Our Very Own Hustler De Tuti Hustlers Previews The Biggest Pay Per View of the Summer of 2013!

XFinity TV Blog reporter @GordonHolmes previewed WWE SummerSlam with our boss Paul Heyman, and we appear to be set for a historic encounter between two Paul Heyman Guys at the biggest pay per view event of Summer 2013!

On Sunday, you can expect “The Beast” Brock Lesnar to prove that having Paul Heyman in his corner makes him “The Best in the World” over and above CM Punk’s claim to that accolade.

CM Punk and I together were the best in the world. We held the WWE Championship for 434 consecutive days, the longest WWE Title reign of the past 25 years. Think about that. Names like Hulk Hogan, Shawn Michaels, “Stone Cold” Steve Austin, The Rock, The Undertaker, all first-ballot Hall of Famers, and yet none of them could hold the championship as long CM Punk and I together. Obviously I saw in CM Punk a sports entertainer that I could mold into being part of a combination with me as the absolute best act on the planet. But without me? He’s only half the equation and I have “The Beast” Brock Lesnar with me.

I think Daniel Bryan is a fascinating performer who has put on arguably the most consistent string of best matches of the past year. The striking thing about Daniel Bryan is the best is yet to come with him. Daniel Bryan still has more to offer. And having seen footage of him dating back to when he was wrestling in VFW halls and very small arenas and high school gymnasiums, he still has so much more that the WWE Universe hasn’t seen. I’m admittedly, and I will confess to this, a huge fan of Daniel Bryan.

I think there’s a streak going involving John Cena that both the WWE Universe and the media have failed to pick up on. The glory days of “Stone Cold” Steve Austin lasted two, maybe two-and-a-half years. That was the peak of his run. He came back as General Manager, but day-to-day, going to every city, main eventing every Pay Per View, the focal point of Monday Night Raw…Steve Austin’s peak was two-and-a-half years. Dwayne “The Rock” Johnson’s peak was along the same lines. John Cena has been the focal point of WWE since 2005. For eight and now going on nine years, John Cena has not only main evented all the Pay Per Views, been the major attraction on Raw. John Cena has gone to every city, main events all the live events, and yet he still makes all these media appearances, he’s done more Make-A-Wish Foundation visits than anybody in history…and he’s a tireless workhorse. And he shows up last Monday with his elbow…looking grotesquely…is that a word? His elbow was so messed up and yet he says, “Wrap me up, I’m going out there to perform because the people are counting on me.” There is a work ethic to John Cena that is to behold.

I don’t mind getting into detail. I think TNA squandered the opportunity of exploiting the talents of Rob Van Dam. And I don’t think that’s a mistake the WWE is going to repeat.

Of course, we’re HustleTweeting about Paul Heyman’s interview with XFinity and you’re more than welcome to join us by following us on twitter HERE or write us directly at hustleoncrave@gmail.com  Hey, have you checked out the Hustle’s Ultra High Quality You Tube Channel, with exclusive videos featuring OUR WORLD EXCLUSIVE WITH MIKE TYSON … BROCK LESNAR’S “HERE COMES THE PAIN” … ICE-T AND COCO’s SEX SECRETS … TEEN SENSATION TAYLOR MOMSEN … UFC BAD BOY NICK DIAZ … THE WALKING RIOT MISSY HYATT if you’re not subscribing, you’re missing something … and by the ways cheapos, it’s FREE! Yes, absolutely 100 percent FREE! What are you waiting for? Check it out HERE!