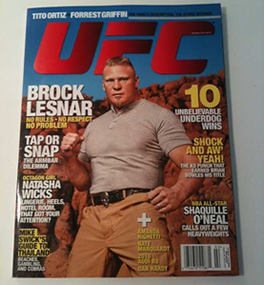 UFC President Dana White had it all figured out. UFC 106 was going to look great on the books of the privately-owned Zuffa Entertainment corporation. Coming off the monster success of the Brock Lesnar-headlined UFC 100, the parent company for the Ultimate Fighting Championships would put on a show that would not only do huge box office live at the arena (a “given” with major UFC events now), but also get one more Lesnar-driven pay per view on the books before closing out income derived from the 2009 schedule.

The billboards were up. The advertising campaign was created. Even the brand new UFC magazine, with the former WWE “Next Big Thing” on the cover, would hit the stands the week of the show. The timing was perfect. Another grand slam for UFC and also for exec-in-the-spotlight Dana White.

When I owned and ran Extreme Championship Wrestling, I used to joke about my perception of the real job behind the job title. I always told my staff that my job was a firefighter. I spent half my time putting out fires. New Jack stabbed somebody. The Dudleys beat up 40 people in a National Guard Armony riot, and everyone’s suing. Sabu missed his flight or wanted to take a booking in Outer Kalakalakaville because the overseas promoter wanted an “Extreme Death Match” and would pay him a lot of money, someone didn’t get their video tape and was complaining to the Better Business Bureau, you name it. Always a problem. Ten problems an hour. Mick Foley didn’t want more money, he wanted to be in the show open for 1 more clip, or 3 more seconds. Raven thought Tommy Dreamer should beat him and then turn heel. Chris Candido and Tammy had an idea. Eric Bischoff was offering someone a couple of hundred grand to jump. Vince McMahon wanted to do more business, but the price was to lose our identity. And oh yeah, New Jack stabbed another person because by this time in the day, it was already 11am.

Such is the day of a person running a sports entertainment or entertaining-sport franchise. You don’t own the business,the business owns you.

Dana White knows this all too well. He has a favorite saying, “every day when I wake up, I know bad shit is going to happen.”

Oh, how correct he is. 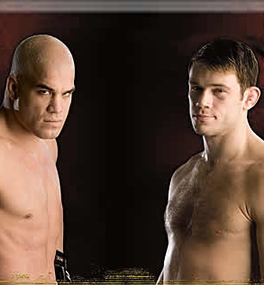 Part of the grand scheme for UFC 106 was the return of UFC Legend Tito Ortiz. The former Light Heavyweight Champion, whose falling out with Dana White was headline news 2 years ago is now the proud significant other of multi-million dollar businesswoman (and the world’s most famous and successful retired adult film star) Jenna Jameson. Living the high life, appearing on red carpets in Hollywood and Vegas, Tito’s return to UFC is being met with both excitement and skepticism. Can he still be the hungry animal he once was? Can the man who brutally punished Ken Shamrock slug it out with a game, driven, determined-to-get-back-into-the-mix Mark Coleman?

The matching of Ortiz and Coleman was interesting. Coleman is another UFC Legend, looking to cement his legacy and pull another “Randy Couture” / Rocky 6 miracle comeback. The hype was set. The advertising paid for. The billboards put up. The tv specials in production.

Then Coleman pulled out. An almost-worst case scenario for UFC. Hey, it wasn’t Lesnar getting hurt. It was the SEMI-main event.

So Dana White scrambled, called Forrest Griffin, who was on his honeymoon, and offered him the fight against Ortiz. Griffin, coming off an embarrassing thrashing from Anderson Silva, was eager to get back into the Octagon. Catastrophe averted. Fire put out.

All of a sudden, the Coleman controversy seemed like a cigarette butt left half-lit on the sidewalk.

Brock Lesnar was sick. His Undisputed UFC World Heavyweight Championship showdown with the undefeated Shane Carwin was going to have to be postponed. The biggest sensation in UFC … FAR BIGGER THAN FLASH-IN-THE-PAN KIMBO SLICE… was no longer available for the November 21st mega-cash money making pay per view event.

Dana White moved Tito Ortiz and Forrest Griffin to the main event. He added Josh Koshcheck vs Anthony Johnson to the show. The advertising, again, was changed. The marketing, again, was adjusted. The contracts, again, were amended.

The fire, at least for now, was put out.

The damage to the buy rate for UFC 106 is immeasureable. Without Lesnar, the interest in the show is considerably less. But there is still enormous cache in the UFC brand name. UFC sells itself based on the fact they –more often than not– deliver on their promises and present damn good fights under the brand name’s umbrella.

Even without Lesnar, UFC 106 will make a ton of money for Zuffa. The old pro wrestling / boxing disclaimer “Card Subject To Change” has taken on a whole new meaning, but UFC’s strength lies not only in their financial wealth and the size of their roster, but also in the brand name “UFC” … and the company can weather these storms because it has invested in the biggest name The Ultimate Fighting Championships will ever present … UFC itself.

The fire was indeed damaging, but the brand survives. The show will go on.

For Dana White, it’s just another day at the office. 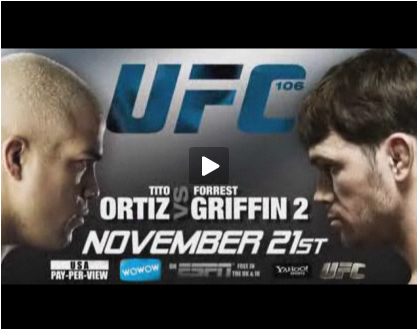