Looking Back on Paul Heyman's Blog: "An Audience of One" 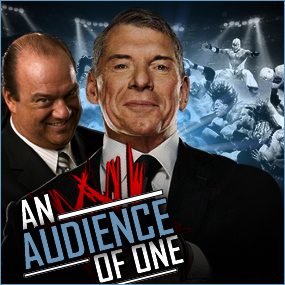 CM Punk’s riveting interview tonight on Monday Night Raw echoes the sentiments expressed by our own Hustler De Tuti Hustlers on September 19, 2008!
This article was originally posted as part of THE HEYMAN HUSTLE series of blogs written by Paul Heyman for The Sun (UK) on September 19, 2008. You can see the original post HERE!
There is going to come a time, and it needs to be sooner rather than later, when the professional wrestling industry realises we’ve reached that dreaded recurring period in history.
That time when one generation is moving on to other forms of entertainment and a new generation needs to be enticed to sign on and join the “sports entertainment fan” culture.
When the era of the territorial local stars gave way to the Hulkamaniacs, a new generation of fans replaced the older ones.

When the Hulkamaniacs started chasing girls or went off to college, the new era of Attitude and nWo and ECW came into vogue.

When that genre of sports entertainment ran its course, some of the fans stayed on, and a different crowd, attracted by new hot young stars like John Cena replenished the ranks.

That’s why Cena is such a polarising figure with today’s crowd.

Half the audience – who were probably fans in the pre-Cena era – hate him.

The other half, a younger crowd probably lured into watching the product specifically because of new characters like Cena, think he’s the embodiment of a new generation of professional wrestling.

That’s the generational divide, and it’s now even affecting the Cena crowd.

WWE is especially at the crossroads. Their United States PPV revenue has not grown by any noticeable margin and while the international PPV, live event, and merchandising sales have picked up the slack, the core product itself has grown terribly stale.

Raw, for example, is just an over-produced, plodding show. Even the good episodes tend to drag right now.

This is not a knock on the “PG-themed” WWE. The days of dangerous stunts and unprotected chair shots are over, especially in a concussion-conscious, post-Benoit pro wrestling industry.

Yes, believe it or not, this Extreme Promoter understands the limitations in today’s environment of the style he popularised.

However, that doesn’t mean the show can’t be fast-paced and exciting to watch.

Nothing feels young and vibrant. Even Ted DiBiase Jnr and Cody Rhodes, who are in their early 20s and are already fantastic in their roles, have haircuts and ring attire that can be worn by people in their mid-30s.

Randy Orton? Best young talent in the industry today, and yet if he were 40 years old, he’d wear the same clothes and style.

Even when WWE ushers in a youth movement, it’s negated by the fact that no one in WWE appears to be playing to a younger audience.

The reason is because too many people inside the organisation are not concerned with the reaction of the ticket buying crowd, they’re instead trying to solely appease WWE chairman Vince McMahon.

A few years ago, Vince came to the creative team and said: “What band should open WrestleMania?”

All sorts of names were floated around, none of them that would help brand WWE as being on the cutting edge.

When I suggested System Of A Down, only one other member of the creative team even knew the band I was suggesting.

I would submit to you that if WWE wants to attract a new generation of fans, they need to understand what’s moving pop culture today, and who is on the horizon for tomorrow.

In the same light, how is a roomful of people who only understand what it takes to avoid Vince’s irritability going to pitch ideas that break through today’s Attention Deficit Disorder viewing habits?

How is a group that as a whole is trained to shift gears the moment Vince doesn’t relate to the concept going to be able to introduce a new, youth-oriented movement?

If WWE wants to truly shake up the system, here’s a suggestion…

Find three people within the ranks who can identify with today’s youth, or who at least keep up to date on the trends.

If someone says “The Jonas Brothers are hot,” show them the door.

The Jonas Brothers may get 17 gazillion views on their MySpace or Facebook pages, but they don’t appeal to a male audience.

What would it hurt for Vince to sit down with Rey Mysterio and say: “Come back to me in a week with an outline for the top three storylines all the way to Royal Rumble.”

How can it be bad for Vince to offer someone like The Miz, who obviously keeps his finger on the pulse of today’s contemporary beat, and offer him a small bonus to come with new ideas for names, instead of this moronic, counter-productive movement to rip-off other genres like Kenny Dykstra and Dolph Diggler.

Why not go out on a limb and try some creativity and unique branding so the audience can really get behind someone as their own?

Is it inconceivable that Cody Rhodes or John Morrison would have some suggestions on how to spruce up a new persona with some creative fashion designs?

Once Vince gets some ideas from Rey or the Miz or whomever, then he can take these ideas to the creative team and challenge them, indeed charge them with embellishing on the new, youthful, non-traditional concepts.

The problem is that WWE, from the conception to the implementation of all ideas is in a rut because everything is based on AN AUDIENCE OF ONE.

And that “one” is Vince McMahon.

Get some ideas from people who don’t know what Vince likes and doesn’t like and you may just get an opinion that shakes up the system.

Otherwise how is the current stagnant product going to evolve into a fun commodity to watch and follow and spend money on?

What’s the catalyst that’s going to usher in some new wave of WWE Universe-friendly fandom? Everything in the current system is “in the box”.

Time to go outside that box, rope in some really radically different, exhilarating concepts and pour that WWE magical promotional formula all over it…

And end this era of the yawnfest that has now become today’s product.

Of course, we’re HustleTweeting about Anderson vs Angle, and you’re more than welcome to join the conversation by following the Hustle on Twitter HERE or write to us directly at hustleoncrave@gmail.com