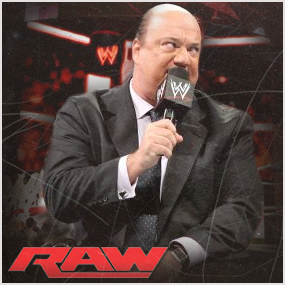 In the shocker to end all shockers, our very own Hustler De Tuti Hustlers takes on 18,000 Raw Hijackers in Chicago … and THEN brought out BROCK LESNAR!

Our boss Paul Heyman warned us here at THE LOOKING4LARRY AGENCY (parent company to THE HEYMAN HUSTLE) that WWE Monday Night RAW would be memorable, and he was right. The Mad Scientist took center stage, in the middle of the ring, to face off against 18,000 Chicago natives who wanted to see their hometown hero CM Punk, only Punk has since quit WWE and was not going to appear. Enter our boss. And cue the controversy!

Faced with a Chicago crowd foaming at the mouth for the return of CM Punk, Paul Heyman addressed his former protégé’s absence the only way he knew how: By sitting cross-legged in the ring and denouncing the WWE Universe who “took [Punk] away” from Heyman and The Undertaker, who instigated Punk’s fateful break from Heyman’s tutelage.

However, with The Phenom back in Heyman’s sights after the events of last week, a revenge-hungry Heyman brought out Brock Lesnar to respond to last week’s confrontation with The Undertaker, but The Anomaly soon found himself besieged – yet again – by Mark Henry, who’s still got a score to settle with the former UFC Heavyweight Champion after being injured at his hands. Despite scoring a strike to The Anomaly’s face, The World’s Strongest Man found himself F-5’ed through a table in a demonic demonstration to The Deadman, wherever he may be.

Of course, we’re HustleTweeting about Paul Heyman’s Pipebomb, and you’re more than welcome to join the conversation by following the Hustle on Twitter HERE or by hitting LIKE on our hyper-interactive Facebook page HERE!