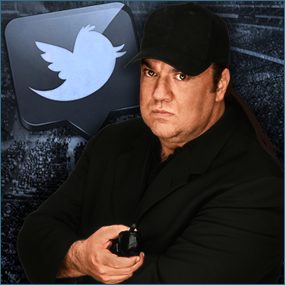 “Just when I thought I was out, they pulled me back in!”

We keep telling you. If you’re not a HustleTweeter, you’re missing out. Our own Hustler De Tuti Hustlers Paul Heyman took to Twitter and cleared up some rumors … and probably started a whole bunch more … with a rant on Twitter.

It is amazing how many rumors are flying around. I don’t like to address rumors. It lends credibility to them, and the moment you answer ONE rumor,you immediately call attention to the other rumors (no matter how ridiculous they are) by NOT responding!We’re going to clear up some issues. Set the record straight. Get some people “on point,” and stir some things up!

Brock’s theory of “let them speculate” seems to be a damn smart one, and I certainly see the merits of that position.

HOWEVER (aha! There is a “but” involved here)… Just to address two items that so many people seem to be giving credence to.

@CMPunk and I have NOT pitched the idea of being aligned to anyone. If we did, you wouldn’t know about it. Did anyone know I was coming back on May 7th as Brock’s representative? NO ONE KNEW! So if @CMPunk and I have … or had .. or will have a plan … I assure you, it would have / will play out in front of your very eyes. @CMPunk doesn’t need an advocate. Nor a spokesman. Nor a representative. That’s not his character. Brock’s character totally different.

The other rumor to address … Whether @WWE is interested in extending my deal, Brock’s deal, etc. Not one single person has hit the nail on Brock’s deal with @WWE … and that’s the way Brock likes it! … and since NO ONE knows what my deal is, it would be impossible for anyone to state with certainty what my situation IS … or ISN’T! And, just for the record, I’m not discussing it.

Here’s my reasoning for it … When I left @WWE in 2006, I thought I was done. Gone. Never to return. I loved working with Brock on his book. Building #LOOKING4LARRY with @MStuart777 has been a total blast! The @HeymanHustle website and digital program has been the cornerstone of our agency, and we love doing it.

This whole deal has been a surprise. A surprise for you. A surprise for my kids. A surprise for the WWE Universe. A surprise for ME, too. Enjoy the ride. Watch it unfold. See what happens. For the first time in forever, we have people GUESSING what comes next. If for no other reason but THAT, there’s nothing 2 discuss. You know there’s a heavily-promoted match this Sunday at @WWE #SummerSlam

You’ve seen @ShawnMichaels, Stephanie McMahon, all our CHILDREN be a part of this main event. Now it comes down to Brock Lesnar vs HHH. If we’ve sold you on buying the ppv, I bet you get your money’s worth on this match alone. If we haven’t sold you on the ppv yet, then thank you for your time, and I hope something else has captured your attention or imagination.

Brock and I are “all-in” for this Sunday. And just based on what his future holds, HHH is “all-in,” too. This is a match everyone wants you to remember.

So … I’m not addressing any more rumors. I’m not confirming. I’m not denying. I’m focused on this Sunday … … and I’m looking forward to watching Brock and HHH live up to, and indeed EXCEED everyone’s expectations.Is this hype? Yes. But it’s Hype routed in TRUTH. Is this a rant? A diatribe? A long-winded TwitSpeech? Absolutely! Hope you liked it.

@WWE #SummerSlam #BrockLesnar vs #HHH #ThePerfectStorm Has Hit L.A.! Just when I thought I was out, they pulled me back in!”

Of course, we’re HustleTweeting about Paul’s rant, and you’re more than welcome to join the conversation by following THE HEYMAN HUSTLE on Twitter HERE or write to us directly at hustleoncrave@gmail.com  Hey, have you checked out the Hustle’s Ultra High Quality You Tube Channel, with exclusive videos featuring OUR WORLD EXCLUSIVE WITH MIKE TYSON … BROCK LESNAR’S “HERE COMES THE PAIN” … ICE-T AND COCO’s SEX SECRETS … TEEN SENSATION TAYLOR MOMSEN … UFC BAD BOY NICK DIAZ … THE WALKING RIOT MISSY HYATT if you’re not subscribing, you’re missing something … and by the ways cheapos, it’s FREE! Yes, absolutely 100 percent FREE! What are you waiting for? Check it out HERE!