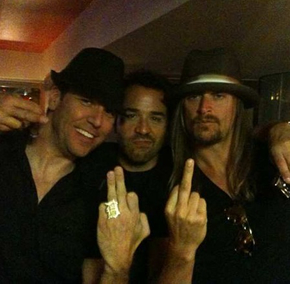 Cook is in the middle of a raging controversy over his remarks, which were cut, about Vanessa Whateverhernameis keeping her clothes on. And they way he delivered the remark was just lame.

Piven, of course, is coming off some piss poor reviews for his performance on WWE Monday Night Raw, where he was promoting “The Goods.”

And Kid Rock? Since his divorce from Pam Anderson, he really hasn’t been doing much (damn, his eyes are red … must be hayfever season), but we still love his music.

Well, thanks for the gesture, fellas. Here’s to ya!

EVERY SINGLE ONE OF THESE PIC-LINKS
HAS BEEN PICKED OUT FOR YOUR VIEWING PLEASURE.
NOW CLICK ON THE LINKS AND ENJOY, DAMMIT!