The Penguins Are Kicking Ass in the NHL Playoffs 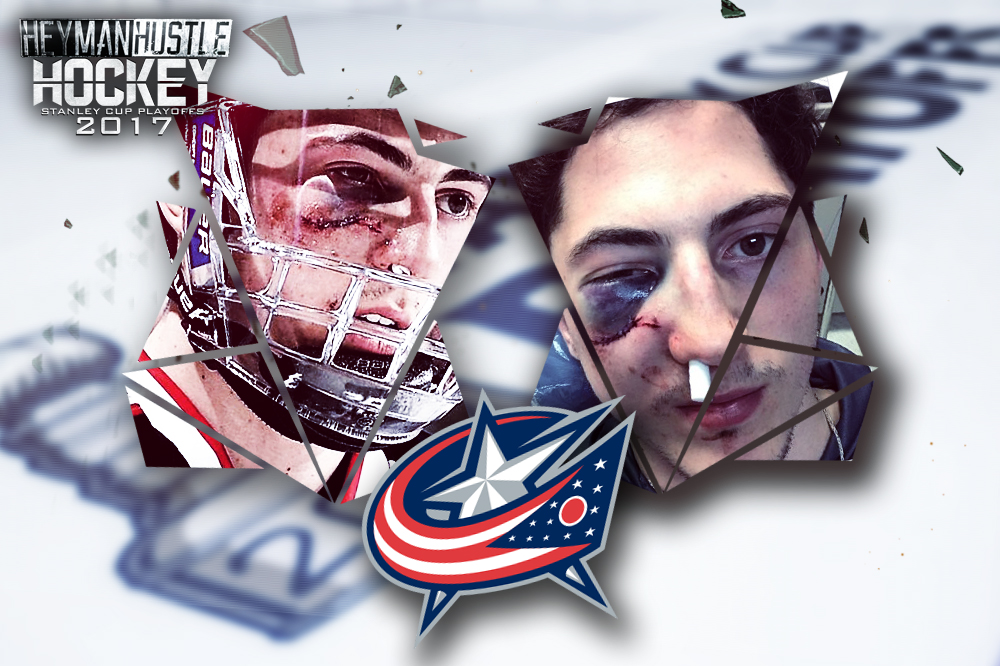 Last night, the defending NHL Stanley Cup champion Pittsburgh Penguins racked up their 3rd straight victory in Game 3 of their 2017 opening-round Playoff series against the Columbus Blue Jackets, winning 5-4 in overtime (the 7th individual game to go to OT in the first 5 days of the 2017 Playoffs. #NHLOT). The game saw a thrilling Pens comeback from a commanding Columbus lead (which included a Blue Jackets goal in the first 11 seconds), thanks in part to a hat trick from Penguins rookie forward Jake Guentzel, who scored both the opening goal and OT game winner. The 22-year-old Guentzel now goes down as only the 2nd rookie in history to ever score a hat trick in the Stanley Cup Playoffs.

But even nastier than “Sid and the Kids” current stranglehold on the series is the brutal season-ending facial injury sustained by Columbus’ 19-year-old rookie defensemen Zach Werenski.

Late in the 2nd period, Werenski caught a puck straight to the face after a slap shot from Pittsburgh’s Phil Kessel went up his stick, opening up a huge gash and breaking his cheekbone. With no whistle blown dead at the referee’s discretion, a bloodied Werenski down, Columbus essentially shorthanded, and Pittsburgh in possession of the puck in the offensive zone, Bryan Rust lit the lamp for the Penguins, evening things up at 3-3. Amazingly, Werenski briefly later returned to the ice, stitched up and in full face mask, to play a few shifts in the 3rd period before his eye nearly swelled shut, forcing him to sit on the bench during overtime.

Earlier today, Columbus head coach John Tortorella announced that Werenski’s stellar season is over due to a facial fracture.

The 3-0 Penguins now threaten to sweep the Blue Jackets, with Game 4 set for this Tuesday night at the Nationwide Arena in front of what promises to be a rabid and hostile Columbus crowd. As for rookie sensation Werenski, they say a picture is worth a thousand words, but his gory post-game battle scar selfie only needed two: “Playoff hockey…”

We are HustleTweeting about the NHL Playoffs and you’re more than welcome to join the conversation on the Hustle Twitter HERE and also on our hyper-interactive Facebook page HERE!