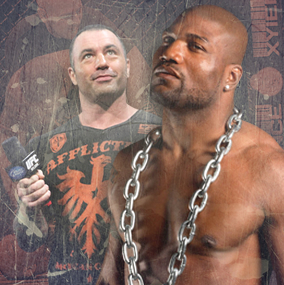 The UFC 144 Co-Main Eventer is NOT Happy with MMA’s Most Knowledgeable Announcer!

Rampage Jackson wants to hype up his UFC 144 co-main event against Ryan Bader, but he doesn’t want to discuss the fight once it’s over with Ultimate Fight announcer / commentator / interviewer Joe Rogan.

In typical Rampage fashion, the comment came out of nowhere, as he was being interviewed by Fighters Only and was asked to describe the perfect outcome for his return to Japan. All of a sudden, Rampage blurted out that he’d like to leave the Octagon this weekend without being interviewed by Rogan, and of course preferably after a victory over Bader.

Well, Rampage is angry about comments Rogan made when Rampage fought Jon Jones. It appeared as though Rogan was calling for Rampage to keep throwing leg kicks, but Rampage explains he was hesitant with his kicks because he knew that would allow Jones to take him down.

“If you win then Joe Rogan’s got to do an interview with you,” Rampage stated.  “And most likely he has been talking some crap about you and how you don’t throw leg kicks.”

Rampage said Joe kept questioning the decision not to throw the kicks. “Because Joe, I am fighting a wrestler who wants to take me down really bad, that’s why I’m not throwing leg kicks!” Rampage exclaimed.

Then Quinton Jackson went on a Rampage.

In regards to Rogan, he stated that when the fight’s over, he always feels like “Oh, here comes Joe Rogan and he’s all fake in his face like he’s not just picked apart your whole game like he’s the best fighter in the world and he knows every decision you’re gonna make while he is just sitting there watching you.”

Asked by Fighters Only the question about how a fight between Rampage and Rogan would go, Rampage replied: “I would beat the shit out of Joe Rogan, as long as he don’t get me to the ground, because his jiu-jitsu is really good. I know he’s got good jiu-jitsu because he’s so biased towards jiu-jitsu guys. Every time a guy is a jiu-jitsu fighter Rogan might as well be playing the rusty trombone!”

Rampage wasn’t done. He was just getting started.

“I don’t give a fuck, I am sick of people putting their [opinions]. Sometimes [I can hear him], because Joe Rogan has one of those girly high-ass voices that you can hear. I just want to tell him to shut the fuck up. Let’s see you do it. Let’s see you come in here and kick this mother fucker who wants to take you down. Shut the fuck up!”

Ah, now we have something to HustleTweet about today! Please remember you are more than welcome to join the conversation by following THE HEYMAN HUSTLE on Twitter HERE or write to us directly at hustleoncrave@gmail.com  Hey, have you checked out the Hustle’s Ultra High Quality You Tube Channel, with  exclusive videos featuring BROCK LESNAR’S “HERE COMES THE PAIN”  … ICE-T AND COCO’s SEX SECRETS … THE ULTIMATE WELTERWEIGHT BAD ASS NICK DIAZ … CONTROVERSIAL TEEN SENSATION TAYLOR MOMSEN … LEGENDARY MMA PIONEER FRANK SHAMROCK … THE WALKING RIOT MISSY HYATT … if you’re not subscribing, you’re missing something … and by the ways cheapos, it’s FREE! Yes, absolutely 100 percent FREE! What are you waiting for? Check it out HERE!