The Countdown is On For WWE Monday Night Raw Episode 1000 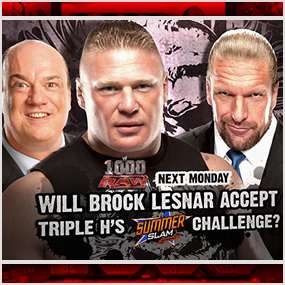 … and unless you’ve been living in a cave, the big news is that our own Hustler De Tuti Hustlers Paul Heyman is bringing Brock Lesnar back to Raw to answer HHH’s Summer Slam challenge … Face to Face!

… and unless you’ve been living in a cave, the big news is that our own Hustler De Tuti Hustlers Paul Heyman is bringing Brock Lesnar back to Raw to answer HHH’s Summer Slam challenge … Face to Face!

WWE makes history this Monday night with the 1000th edition of Monday Night Raw, with a special starting time of 8pm Eastern Time, and the entire balance of power in the world’s leading sports entertainment organization could be turned upside down as our own Hustler De Tuti Hustlers Paul Heyman will deliver Brock Lesnar, who will answer HHH‘s Summer Slam challenge face-to-face!

The anticipation for Brock’s return is high. HHH BLASTED PAUL WITH A KNOCKOUT PUNCH during the Raw from Long Island’s Nassau Coliseum, and it was a blow that promoted a response from Paul in which PAUL INFORMED VINCE McMAHON’S SON-IN-LAW THAT BROCK WAS COMING BACK AT RAW 1000!

So now, we have a situation brewing in which Raw 1000 will be highlighted by what could be an epic confrontation between Brock Lesnar and HHH, all orchestrated by one very well known Hustler!

Of course, we’re HustleTweeting about Brock, HHH, and our own boss, with you being more than welcome to join the conversation by following the Hustle on Twitter HERE or write to us directly at hustleoncrave@gmail.com  Hey, have you checked out the Hustle’s Ultra High Quality You Tube Channel, with  exclusive videos featuring BROCK LESNAR’S “HERE COMES THE PAIN”  … ICE-T AND COCO’s SEX SECRETS … THE ULTIMATE WELTERWEIGHT BAD ASS NICK DIAZ … CONTROVERSIAL TEEN SENSATION TAYLOR MOMSEN … LEGENDARY MMA PIONEER FRANK SHAMROCK … THE WALKING RIOT MISSY HYATT … if you’re not subscribing, you’re missing something … and by the ways cheapos, it’s FREE! Yes, absolutely 100 percent FREE! What are you waiting for? Check it out HERE! 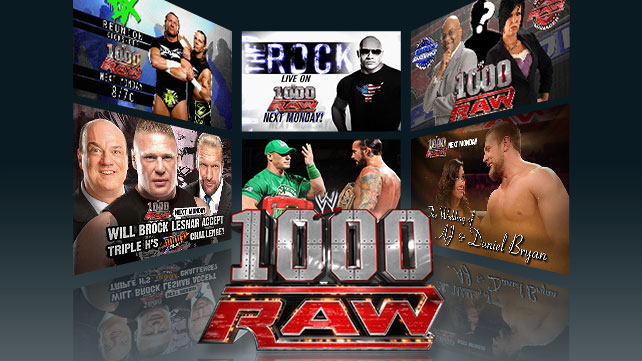