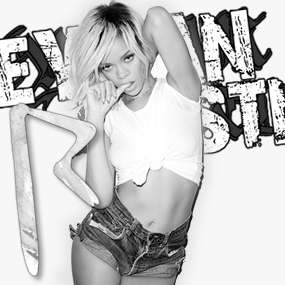 The Singer-Actress-Pop Culture Phenomenon Is About To Embark in Yet Another Journey!

Rihanna’s resume is about to have another category added to it. Already competing with LADY GAGA for the bragging rights of being the world’s most discussed and debated pop star, Rihanna  and “Big Bang Theory” star Jim Parsons will play the lead voices in “Happy Smekday!” a DreamWorks Animation adaptation of the award-winning book “The True Meaning of Smekday” by Adam Rex.

This will be the voice acting debut for Rihanna, who made her live-action film debut in this summer’s “Battleship” movie. Parsons, a two-time Emmy winner for “Big Bang,” has done voicework for a handful of shows, including “iCarly” and “Family Guy.”

The plot for “Happy Smekday!” sees a friendly alien race invades Earth and uses it as a hideout from their mortal enemy. When one lowly alien accidentally notifies the enemies of his whereabouts, he is forced to go on the run with a teenage girl, embarking on a comical road trip across a post-apocalyptic America and learning what it really means to be human.

Of course, we’re HustleTweeting about Rihanna, and you’re more than welcome to join the conversation by following the Hustle on Twitter HERE or write to us directly at hustleoncrave@gmail.com  Hey, have you checked out the Hustle’s Ultra High Quality You Tube Channel, with  exclusive videos featuring BROCK LESNAR’S “HERE COMES THE PAIN”  … ICE-T AND COCO’s SEX SECRETS … THE ULTIMATE WELTERWEIGHT BAD ASS NICK DIAZ … CONTROVERSIAL TEEN SENSATION TAYLOR MOMSEN … LEGENDARY MMA PIONEER FRANK SHAMROCK … THE WALKING RIOT MISSY HYATT … if you’re not subscribing, you’re missing something … and by the ways cheapos, it’s FREE! Yes, absolutely 100 percent FREE! What are you waiting for? Check it out HERE!

CLICK ON THE PICS BELOW TO SEE THE ENTIRE GALLERY OF RIHANNA!