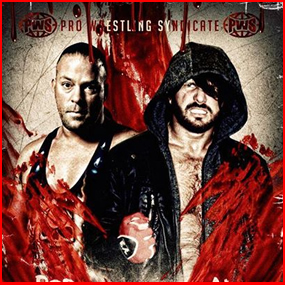 Pro Wrestling Syndicate presented a dream match pitting Rob Van Dam against AJ Styles, with special surprise referee Jerry Lynn officiating the action. The Northeast-based independent promotion is ramping up for their debut on television in the New York market, as PWS Wrestling will debut on WLNY (available in over 7,000,000 homes) starting Sunday, January 4th at 4:30am. According to multiple reports, PWS has signed a one year deal for its weekly episodic television program to air on the station, with plans to feature three or four full matches per show. The promotion is also promising never-before-seen backstage footage that will air as well. The promotion raised the funds for their TV production through a Go Fund Me Campaign started by its fan base.

Of course, we’re HustleTweeting about RVD vs AJ Styles, and you’re more than welcome to join the conversation by following the Hustle on Twitter HERE or write to us directly at hustleoncrave@gmail.com Hey, have you checked out the Hustle’s Ultra High Quality You Tube Channel, with exclusive videos featuring OUR WORLD EXCLUSIVE WITH MIKE TYSON … BROCK LESNAR’S “HERE COMES THE PAIN” … ICE-T AND COCO’s SEX SECRETS … MMA BAD BOY NICK DIAZ … the list goes on and on, so if you’re not subscribing, you’re missing something … and by the ways cheapos, it’s FREE! Yes, absolutely 100 percent FREE! What are you waiting for? Check it out HERE!

CLICK ON THE PICS BELOW TO SEE BOB MULRENIN’s EXCLUSIVE
PHOTO GALLERY FEATURING THE RVD VS AJ STYLES DREAM MATCH!