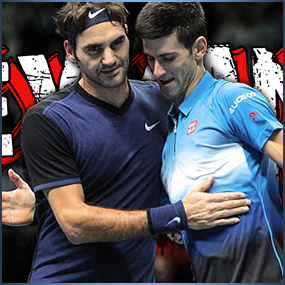 The Hottest Feud in Tennis Features a Shocking 7-5, 6-2 Victory!

The tennis matches between Roger Federer and Novak Djokovic have become wars of attrition, brutally fought matches that even feature BLOOD ON THE TENNIS COURT!

Since their first meeting almost a decade ago, they have met 42 times, and are poised at 21 wins apiece… and since that first meeting, they have five times played five matches in a single year, they have spent more weeks at Number 1  than any other active players, and have won the World Tour Finals 10 times … Federer six times, Djokovic four.

Djokovic certainly came out with all guns blazing, and had a break point in the very first game, but Federer, whose serving in the first set in particular was in a fine groove, held with an ace. It would be Djokovic’s only chance in the set, as both held strongly through to 5-5.

Then Federer held to love and, rather than coming forward in shock attacks, he pounded the baseline. slicing and driving on the backhand, hammering his forehand, with angle and down the line, and earned his first break chance.

Djokovic, one of the most adept players as switching defense into sudden offense, replied in kind. But he could not close it out, and at the second time of asking, Federer did break, and the arena erupted as he sealed the set, 7-5, after an intense 44 minutes.

Federer got off to a racing start in the second set, too, converting the last of three break points. But again, Djokovic showed just how dangerous he is when under pressure. He broke back, but Federer was on a roll. He even got the rub of the net with two break points on the board, as a searing backhand down the line clipped the tape: He apologized, as protocol demands, but he had the 4-2 advantage.

It would not stop there, either. Djokovic was unusually profligate with errors in the final few games and Federer took full advantage. After a love hold, he broke again in the longest game of the match via three deuces and two break points. Djokovic cast the die at Hawkeye in the face of a closing winner, but it was a lost cause.

Federer had the win, 6-2, and that was not all. He maintained his record of never trailing Djokovic in their head to head and, more important, with Kei Nishikori’s three-set 7-5, 3-6, 6-3 win over Tomas Berdych earlier in the day, Federer also became the first man in the tournament to confirm his place in the semi-finals.

Djokovic was pragmatic, as a man who has won 10 titles and 79 matches this season should be. “You have those days when you’re not feeling your best … not even close to the best.” he commented. “Credit to Roger for mixing up the pace, giving me always a different ball. He used the slice and spin very wisely. He served very efficiently. I made a lot of unforced errors. Just handed him the win, especially in the second set… But, again, that’s sport.”

Of course, we’re HustleTweeting about Federer’s Victory over Djokovic, and you’re more than welcome to join by following the Hustle on Twitter HERE or write to us directly at hustleoncrave@gmail.com Hey, have you checked out the Hustle’s Ultra High Quality YouTube Channel, with exclusive videos featuring the #HUSTLEBOOTYTEMPTATS SUPERMODEL OF THE YEAR … OUR WORLD EXCLUSIVE WITH MIKE TYSON … BROCK LESNAR’S “HERE COMES THE PAIN” … ICE-T AND COCO’s SEX SECRETS … MMA BAD BOY NICK DIAZ … the list goes on and on, so if you’re not subscribing, you’re missing something … and by the ways cheapos, it’s FREE! Yes, absolutely 100 percent FREE! What are you waiting for? Check it out HERE!