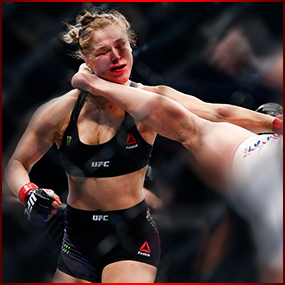 In her very first interview since THE DEVASTATING DESTRUCTION AT THE HANDS OF HOLLY HOLM, the biggest star in Mixed Martial Arts Ronda Rousey was candid, open and emotional as she described what she views as the road back to the top of UFC.

The interview, conducted by Ramona Shelburne, can be found in ESPN THE MAGAZINE and covers a wide range of topics.

“I need to come back,” Rousey said. “I need to beat this chick. Who knows if I’m going to pop my teeth out or break my jaw or rip my lip open again. I have to fucking do it. It doesn’t matter. I have to do it.”

Rousey, who suffered a badly split lip in the knockout loss and underwent cosmetic surgery to repair it, said she might not even be able to bite into an apple for another three to six months. That’s how serious of a beating the most dominant female in MMA history took. Rousey said she was hit with a punch nu Holm 30 seconds into the fight and she never felt the same after that. She said she wasn’t thinking clearly and didn’t have her legs, but told herself it would all be OK if she just kept fighting. Rousey even said that she spit blood onto the floor, not into the bucket in her corner, for the first time ever.

“I just feel so embarrassed,” Rousey said. “How I fought after that is such an embarrassing representation of myself. I wasn’t even fucking there.”

Of course, we’re HustleTweeting about Ronda Rousey, and you’re more than welcome to join the conversation by following the Hustle on Twitter HERE or write to us directly at hustleoncrave@gmail.com Hey, have you checked out the Hustle’s Ultra High Quality YouTube Channel, with exclusive videos featuring the #HUSTLEBOOTYTEMPTATS SUPERMODEL OF THE YEAR … OUR WORLD EXCLUSIVE WITH MIKE TYSON … BROCK LESNAR’S “HERE COMES THE PAIN” … ICE-T AND COCO’s SEX SECRETS … MMA BAD BOY NICK DIAZ … the list goes on and on, so if you’re not subscribing, you’re missing something … and by the ways cheapos, it’s FREE! Yes, absolutely 100 percent FREE! What are you waiting for? Check it out HERE!