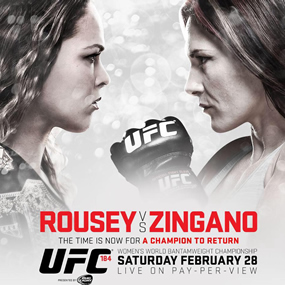 UFC 184 plays home to one of the most amazing performances in Mixed Martial Arts history!

Cat Zingano had a plan. Bull-rush her opponent, use her strength and Muay Thai training to her advantage, and go for the lightning fast victory or advantage. Zingano’s ground-and-pound is serious enough to put a beating on any human being, even the current reigning defending 135 pound Women’s Bantamweight Champion. Unfortunately for the Alpha Cat, the champ was ready for her. That’s what happens when you step into the Octagon against Ronda Rousey.

Rousey recorded the fastest finish of her career tonight, a stunning 14 second victory that is the fastest in UFC Championship history, submitting Zingano via straight armbar in the main event of UFC 184 at the Staples Center in Los Angeles. It was Rowdy Ronda’s fifth UFC title defense, four of which have ended in the first round. Her past three title defenses have lasted 66, 16 and 14 seconds.

But it was one helluva fight. All 14 seconds of it. Zingano rushed Rousey on the opening bell, sprinting into a flying knee attempt. Rousey caught Zingano midair, threw her down, floated her leg over and went directly into the straight right armbar. It’s a version of the armbar Rousey has never done before. She just came up with it in the heat of the battle. Referee John McCarthy stepped in quickly, as Zingano tapped instantly from the hold.

“We were actually suspecting she might do something flying at me right away,” Rousey said. “I’ve actually been working on that behind arm armbar. Not from that angle, but hey, it works.”

The media, of course, was quick to jump on the SuperFight that would pit Rousey against Cris Cyborg, but UFC President Dana White remains insistent the champ doesn’t chase anyone, the challenger chases the champ. Cyborg has to come down to 135 was the message, as the media pressed on and on, looking for someone … anyone … who can simply provide Rousey with a challenge.

We’re HustleTweeting about Ronda Rousey, and you’re more than welcome to join the conversation by following the Hustle on Twitter HERE or write to us directly at hustleoncrave@gmail.com Hey, have you checked out the Hustle’s Ultra High Quality You Tube Channel, with exclusive videos featuring OUR WORLD EXCLUSIVE WITH MIKE TYSON … BROCK LESNAR’S “HERE COMES THE PAIN” … ICE-T AND COCO’s SEX SECRETS … MMA BAD BOY NICK DIAZ … the list goes on and on, so if you’re not subscribing, you’re missing something … and by the ways cheapos, it’s FREE! Yes, absolutely 100 percent FREE! What are you waiting for? Check it out HERE!