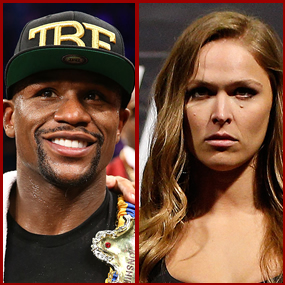 … and we’d love to see the fight happen!

Ask Ronda Rousey a question, and ye shall receive an answer. Just be prepared to transcribe it, because if your question was controversial, you’re going to get an even more controversial answer thrown back at you. UFC’s most talked-about champion was interview on Los Angeles radio station Power 106 FM, and was asked what her battle plan would be if a War of the Undefeated Prize Fighters ever took place.

Of course, we’re HustleTweeting about both Ronda Rousey and Floyd Mayweather, and you’re more than welcome to join the conversation HERE or write to us directly at hustleoncrave@gmail.com  Hey, have you checked out the Hustle’s Ultra High Quality You Tube Channel, with exclusive videos featuring OUR WORLD EXCLUSIVE WITH MIKE TYSON … BROCK LESNAR’S “HERE COMES THE PAIN” … ICE-T AND COCO’s SEX SECRETS … MMA BAD BOY NICK DIAZ … the list goes on and on, so if you’re not subscribing, you’re missing something … and by the ways cheapos, it’s FREE! Yes, absolutely 100 percent FREE! What are you waiting for? Check it out HERE!