Ronda Rousey Wants To Be Challenged, And She's Going To Extremes To Make Sure It Happens 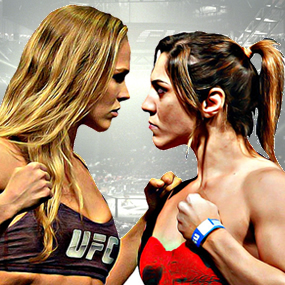 The Baddest Woman on the Planet Wants To Fight Bethe Correia on the Challenger’s Home Turf!

Ronda Rousey wants to fight the new number one contender … on the contender’s home turf … in Brazil of all places … with the Women’s Bantamweight Championship on the line! ROUSEY’S ALARMINGLY BRUTAL 14 SECOND VICTORY OVER CAT ZINGANO at UFC 184 has led to the Brazilian news outlet Globo reporting that UFC is set to announce Rousey vs Bethe Correia as the main event for UFC 190, which is slated for August 1st at the HSBC Arena in Rio de Janeiro. Rousey is once again fighting another undefeated, as Correia is 9-0 incuding two victories over Horsewomen Shayna Baszler and Jessamyn Duke. Another Brazilian news site, Tatame.com, is reporting that the UFC also has plans to put a light heavyweight rematch between Mauricio “Shogun” Rua  and Antonio Rogerio Nogueira together on the UFC 190 fight card. The two last fought under the Pride Fighting Championships banner in 2005, when Shogun won a unanimous decision. Of course, we’re HustleTweeting about Rousey vs Correia,. and you’re more than welcome to join by following the Hustle on Twitter HERE or write to us directly at hustleoncrave@gmail.com Hey, have you checked out the Hustle’s Ultra High Quality You Tube Channel, with exclusive videos featuring OUR WORLD EXCLUSIVE WITH MIKE TYSON … BROCK LESNAR’S “HERE COMES THE PAIN” … ICE-T AND COCO’s SEX SECRETS … MMA BAD BOY NICK DIAZ … the list goes on and on, so if you’re not subscribing, you’re missing something … and by the ways cheapos, it’s FREE! Yes, absolutely 100 percent FREE! What are you waiting for? Check it out HERE!