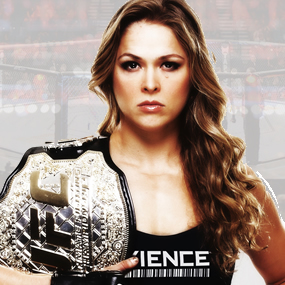 The 135 pound Women’s Bantamweight Championship will be on the line as Rowdy Ronda is now confirmed to defend the title on July 5h at UFC 175!

UFC President Dana White announced on Twitter just a few hours ago that Ronda Rousey will defend the UFC Women’s Bantamweight Title against Alexis Davis at UFC 175 on July 5th at the Mandalay Bay Events Center in Las Vegas. This now becomes UFC’s hottest card of the year, as Middleweight Champion Chris Weidman defends his championship against the legendary Lyoto Machida … and Chael Sonnen faces Wanderlei Silva in a fight that can only be billed as a “Grudge Match.”

Of course, we’re HustleTweeting about Rousey vs Davis at UFC 175, and you’re more than welcome to join the conversation (and you have to realize, this is one ridiculously lively conversation) by writing us on twitter HERE or write to us directly at hustleoncrave@gmail.com  Hey, have you checked out the Hustle’s Ultra High Quality You Tube Channel, with exclusive videos featuring OUR WORLD EXCLUSIVE WITH MIKE TYSON … BROCK LESNAR’S “HERE COMES THE PAIN” … ICE-T AND COCO’s SEX SECRETS … MMA BAD BOY NICK DIAZ … the list goes on and on, so if you’re not subscribing, you’re missing something … and by the ways cheapos, it’s FREE! Yes, absolutely 100 percent FREE! What are you waiting for? Check it out HERE!