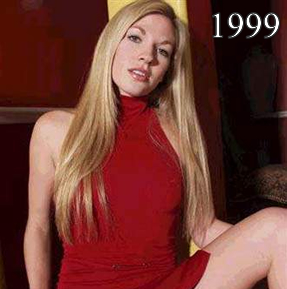 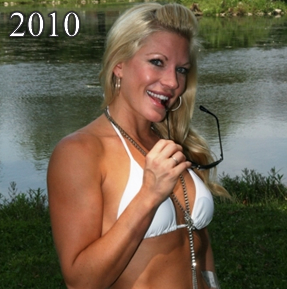 Alicia Webb’s time in professional wrestling was short, but the leggy blonde from Houston, Texas made quite the impact in 1999 as "Ryan Shamrock" in the then-WWF. Whether it was her skits with Val Venis or her time in PMS with Terri Runnels and Jacqueline, Shamrock was a leggy alternative to the surgically-enhanced Divas dominating the company now known as WWE.

Webb later became "Symphony" in WCW, working with The Maestro, and was part of the early days for TNA as "Aleesha." She even worked as recently as May, 2007 in Mexico, with her then-boyfriend Sean "X-Pac" Waltman.

THE HEYMAN HUSTLE‘s photographer Bob Mulrenin caught up with the 31 year old beauty in Pennsylvania at a fitness convention, and snapped these exclusive photos. "I can’t tell you she’s eyeing a comeback in the wrestling business," Bob said, "but she was in great spirits, and interacted well with everyone she met. A real class act!

CLICK ON THE PICS BELOW TO SEE THE ENTIRE EXCLUSIVE
PHOTO GALLERY OF ALICIA WEBB AKA RYAN SHAMROCK 2010!