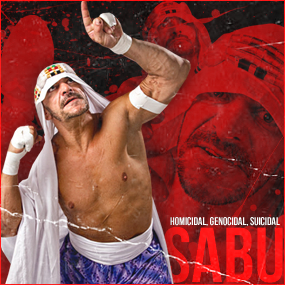 Dragon Gate USA Heads Into WrestleMania with an Extreme Legend Taking On The Best Independent Wrestling Talent in the World. Not Only Will Worlds Collide, But Generations Will Clash This Weekend in the Miami-Dade Area!

I still remember Sabu’s ECW debut like it was yesterday, even though it was almost 20 years ago. To this day, I’ve never seen or been a part of anything like it. It was magic. That’s why I have such a personal as well as professional interest in the fact that this weekend,  Sabu comes to Dragon Gate USA, and Sami Callihan is determined to end the magic forever.

Extreme Championship Wrestling was in its infancy, known as Eastern Championship Wrestling when Sabu was wheeled out on a gurney for his debut with Paul Heyman and 911 by his side. I was one of about 100 fans and crew in the just discovered ECW Arena that night. When 911 unchained Sabu, he went berserk, running into the crowd, throwing chairs everywhere and causing mayhem unlike anything seen in the United States before. To me, the real ECW we all grew to love was born in that moment.

In fact, I’ll go as far to say that Sabu was just as important as Paul Heyman in the first six months of ECW (I wonder how my sensei Heyman would respond to that statement). As word of Sabu’s exploits spread, ticket sales grew and the rabid following developed. Sabu was that something special that people paid to see while ECW homegrown acts like Tommy Dreamer, The Sandman, Public Enemy, Taz and Shane Douglas all needed time to develop and get over. Sabu made ECW stand out and be something different right away.

As crazy as “Dreads” (as we called him) was, I agreed with him. Sabu was a spirit back then and that spirit lives on, despite the best efforts of Sami Callihan.

Sabu has faced a lot of crazy individuals, been in a lifetime’s worth of insane matches and worked for almost every major company all over the world. He has never been confronted by the man like Callihan.

Sami, who calls himself “The Callihan Death Machine,” leads the D.U.F. stable consisting of Arik Cannon & Pinkie Sanchez. As the promoter of DGUSA, I only refer to them as D.U.F. but that stands for the Dirty Ugly Fucks. The name tells you everything you need to know about the group. They can get, well, #EXTREME!

The history between D.U.F. and Sabu dates back to last September. Callihan, Cannon & Sanchez were involved in a violent feud against “#1 Draft Pick” AR Fox. The youngster Fox needed help after getting a bottle smashed over his head, so he called his childhood hero Sabu. The result was a series of bloody, hardcore matches. However, it was last January that Callihan gave Sabu the most extreme beatdown of his career.

The date was January 14th and EVOLVE, DGUSA’s sister company, presented the last wrestling event ever at the former ECW Arena (EVOLVE 10: A Tribute To The Arena is out now on DVD at www.DGUSA.tv). An emotional farewell ceremony to the building saw ECW founder Tod Gordon, JT Smith, Gary Wolfe, New Jack and Balls Mahoney all attempt to close the building in style. As usual, when you get these ECW alumni together things are bound to get wild. A series of events led to Sabu vs. Justin Credible being the final match in the building.

The fans cheered Sabu and Credible as they fought in a bloody brawl with chairs, tables, spikes and the infamous Singapore cane. Finally, Sabu squeaked out the victory. Callihan saw this as his chance to ruin the party. Just as Sabu was about to get speak some rare words on the mic, Callihan attacked him with a bottle. Callihan then ordered the lights to be shut off and closed down the legendary Arena with a prone Sabu helpless on the outside of the ring.

Sabu, the man who made that building, was left injured, bloodied and humiliated in the final segment ever at the corner of Swanson & Ritner.

Callihan took that final feel good moment and memory away from the fans and Sabu. The outcry was immense in the days following the event.

“Sabu should be a legend,” Callihan said. “He influenced all of us. He changed wrestling in the United States. Instead, he’s a joke. He’s an embarrassment. He’s destroyed his own legacy. I’m going to put him out of his misery once and for all. I’m going to retire Sabu.”

It all leads to the huge Dragon Gate USA events this Friday and Saturday in Miami (www.DGUSA.tv for tickets and info). Sabu is set to team with the powerhouse Jon Davis against Cannon & Sanchez in a Street Fight this Friday, March 30th at 8pm EST. DGUSA is offering the live iPPV of this card at www.WWNLive.com for just $1.99. This is a special promotion so new fans have no excuse not to give DGUSA a shot.

Then this Saturday is the big one. It will be Sabu vs. Sami Callihan one-on-one in a No Rules Fight. Callihan wants to make this Sabu’s last hurrah. Sabu needs to show the world he still has it and the spirit will live on. To borrow the words of my mentor, this one is going to get #EXTREME!

Gabe Sapolsky worked for our own Hustler De Tuti Hustlers Paul Heyman in a variety of capacities during Paul’s seven year tenure in the original Extreme Championship Wrestling promotion. Sapolsky, who was the creative head of Ring of Honor, is now performing those tasks for Dragon Gate USA and also the EVOLVE promotion.

Dragon Gate USA presents live events with Sabu this Friday and Saturday at the Deauville Beach Resort hotel on 6701 Collins Ave, Miami Beach, FL 33141. Go to www.DGUSA.tv or call 267-519-9744 for info and tickets.

The DGUSA events this Friday and Saturday featuring Sabu will be on live iPPV at www.WWNLive.com including a special, once-in-a-lifetime price of $1.99 for the Friday event. Both live iPPVs start at 8pm EST and can be watched on your iPhone, iPad, Droid or any device that uses Flash Player.

The video of The End Of The ECW Arena is available here: http://www.youtube.com/watch?v=wAkTu3mpTvw