Sanchez Out As Vick Jets to New York Football 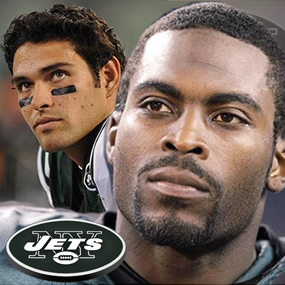 The Jets drop a pair of bombshells on the New York media as the NFL team brings a superstar Quarterback to The Big Apple!

Perhaps the hottest free agent in the NFL, superstar Quaterback Michael Vick, 33 years old, has been signed by The New York Jets, who announced early Friday the signing of the former Philadelphia starting arm at the very same time they announced the release of Mark Sanchez. Vick, who was bumped out of the starting job in Philly (first by injury and later by replacement Nick Foles) then hit free agency in search of a starting opportunity. With the Jets, Vick will most likely compete with Geno Smith for the position of being the starting QB. It’s reminiscent of when Tim Tebow was signed and then reduced to being the backup QB.

“It means a lot to have the chance to come in and play for a great organization that had a lot of success last year and being on the brink of doing some good things,” Vick is quoted in an press release from the Jets football club. “Maybe I can come here and be an asset whenever my number’s called. I’m excited, I’m elated, and I feel like this is a great opportunity for me and my family.”

The New York media has been reporting all day that Michael Vick’s deal is for $5 million and just one season, meaning he could end up being a free agent next offseason. Sanchez, meanwhile, was due a $2 million bonus if he remained on the Jets’ roster as of March 25, so GM John Idzik cut ties and saved the team that money.

Of course, we’re HustleTweeting about Michael Vick’s signing and the release of Mark Sanchez, and you’re more than welcome to join the conversation (and you have to realize, this is one ridiculously lively conversation) by writing us on twitter HERE or write to us directly at hustleoncrave@gmail.com  Hey, have you checked out the Hustle’s Ultra High Quality You Tube Channel, with exclusive videos featuring OUR WORLD EXCLUSIVE WITH MIKE TYSON … BROCK LESNAR’S “HERE COMES THE PAIN” … ICE-T AND COCO’s SEX SECRETS … MMA BAD BOY NICK DIAZ … the list goes on and on, so if you’re not subscribing, you’re missing something … and by the ways cheapos, it’s FREE! Yes, absolutely 100 percent FREE! What are you waiting for? Check it out HERE!