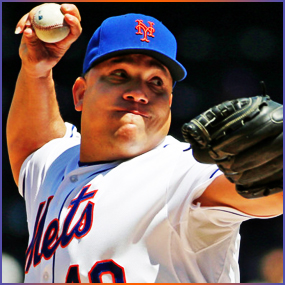 The New York Mets Pitcher Pulls Off The Play of the Year With Ease!

42 year old Bartolo Colon is the best “older” pitcher in Major League Baseball today, and his amazing plays have compelled us to compare him to fellow great 40+ pitchers like Satchel Paige and Nolan Ryan. In the 7-0 victory scored by The New York Mets on Saturay over the Marlins, Colon pulled a basketball move on the diamond, and made it look easy.

In the bottom of the sixth inning, Marlins first baseman Justin Bour hit a soft grounder along the first base line that Colon came off the mound to field. As he grabbed the ball, instead of squaring his shoulders to first base and tossing the ball over as pitchers usually do, Colon ran through the first-base line and threw the ball behind his back, making one of the more unique outs you’ll ever see.

“I know it was a good play and I got my job done,” Colon said. “People in the bullpen were really impressed because they only see my size, but they don’t see I’m the best fielder on the mound that the team has.”

Colon admitted that he practices behind-the-back toss to first before games. “He’s a pretty athletic guy, and I’ve never seen anything like it,” manager Terry Collins said.

Colon immediately let out a wide grin as he made the out, and the Mets dugout was a sea of smiles as they congratulated him on the inning-ending assist.

Colon had one helluva day on the mound, as he lasted nine innings and gave up no runs, becoming the oldest pitcher since Jamie Moyer in 2010 to throw a complete-game shutout. Of course, we’re HustleTweeting about Bartolo Colon, and you’re more than welcome to join the conversation by following the Hustle on Twitter HERE or write to us directly at hustleoncrave@gmail.com Hey, have you checked out the Hustle’s Ultra High Quality You Tube Channel, with exclusive videos featuring the #HUSTLEBOOTYTEMPTATS SUPERMODEL OF THE YEAR … OUR WORLD EXCLUSIVE WITH MIKE TYSON … BROCK LESNAR’S “HERE COMES THE PAIN” … ICE-T AND COCO’s SEX SECRETS … MMA BAD BOY NICK DIAZ … the list goes on and on, so if you’re not subscribing, you’re missing something … and by the ways cheapos, it’s FREE! Yes, absolutely 100 percent FREE! What are you waiting for? Check it out HERE