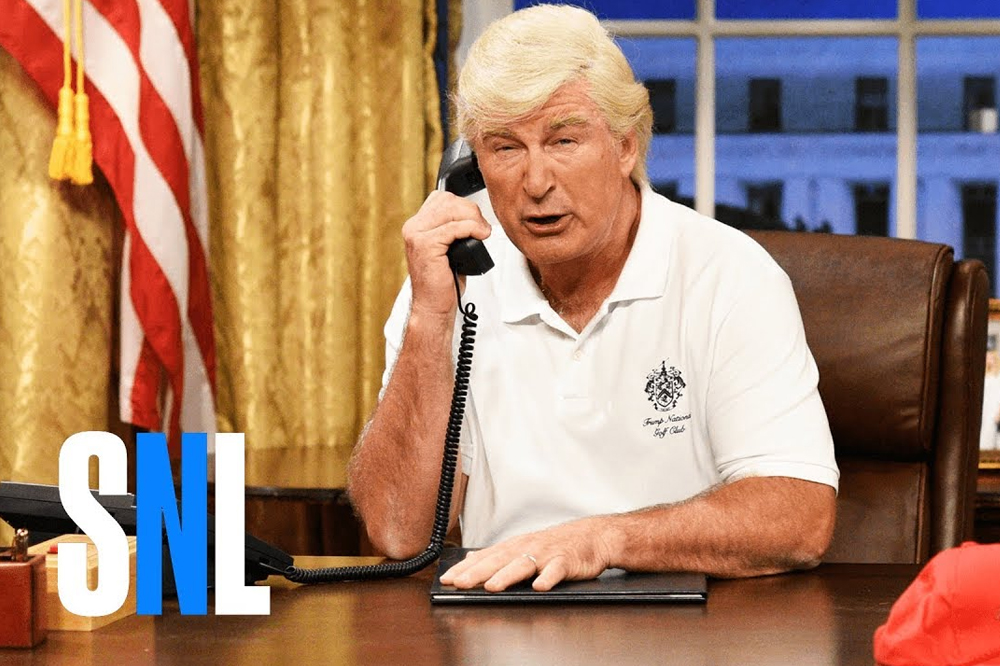 Alec Baldwin took center stage for the Season 43 premiere of Saturday Night Live, bringing his Donald Trump impersonation to the heavily-hyped episode, and Baldwin came out swinging hard at POTUS.

“It might seem like what’s coming out of my mouth is B-A-N-A-N-A-S, but it’s all part of the plan. The more chaos I cause, the less people can focus. They’re all getting so tired,” Baldwin-as-Trump said. “So let’s keep the chaos coming and shake things up around here.”

Much has happened with the Trump administration since SNL‘s 42nd season ended in May, and the show packed in as much as that could … like the exits of Tom Price, Anthony Scaramucci, Sean Spicer, Steve Bannon, et al … before tackling a pair of more recent Trump controversies, namely his handling of hurricane-ravaged Puerto Rico and his comments regarding NFL players’ anthem protests.

In the first part of the sketch, Baldwin-as-Trump, in his golf wear, bickers with San Juan Mayor Carmen Yulín Cruz (played by Melissa Villaseñor) over the relief efforts in Puerto Rico, which he just learned was a U.S. territory.

“Trust me, I know things are as the locals say Despacito, but we’re going to get more help to you immediately, probably either Tuesday or Wednesday at the latest,” Baldwin-as-Trump says. “FEMA takes a few days, unless you join FEMA Prime.”

Trump and Sarah Huckabee Sanders (played by Aidy Bryant) then discussed POTUS‘ remarks about the NFL anthem protests. “People say I remind them of an NFL player because I’m combative, I like to win and I might have a degenerative brain disease,” he said.

The sketch also touched on Trump’s threats against North Korea and their “Rocket Man,” Trump’s dealings with Democratic US Senator Chuck Schumer and his hot-and-cold relationship with Attorney General Jeff Sessions, played once again by SNL’s Emmy-winning Kate McKinnon.

We’re HustleTweeting about SNL, and you’re more than welcome to join the conversation on the Hustle Twitter HERE and also on our hyper-interactive Facebook page HERE!