Serena Vs Venus: The Williams Sisters To Collide at the US Open 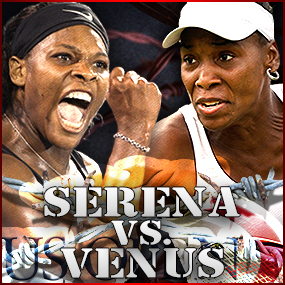 Serena’s bid for the first Grand Slam since 1988 has an interesting roadblock … her sister Venus!

The planets are aligned against Serena Williams‘ bid to become the first Grand Slam Champion since 1988, as sister Venus will oppose Serena tomorrow in a  U.S. Open quarterfinal. It’s their 27th showdown, and Serena leads 15-11. But never before have the sisters played against each other with so much on the line.

Oracene Price, the mother of the Williams sisters, said she will stay back at the family’s rented Manhattan apartment when her daughters face each other tomorrow. She even told the media she’s not going to take in a Broadway show in order to avoid watching her girls oppose each other.

“Broadway’s not good anymore,’’ Price said. “I’ll probably kick around the house, go to a store, shopping. I won’t be watching the match. It’s hard for them to be in this position.’’

“She’d rather to lose Venus than anyone else, but she doesn’t want to lose,’’ Serena’s coach, Patrick Mouratoglou, said.

“[Venus is] doing well and she wants to win this,’’ noted Serena. “So do I. It’s not easy. It’s been an amazing rivalry. We’ve done a lot for the sport.’’

On the court after her win, Serena said, “I have to play as good or better. At least a Williams will be in the semis. So that’s good.’’

The Williams Sisters last faced off in the Wimbledon quarterfinals, with Serena prevailing. “I’m playing, for me, the best player in the tournament,’’ Serena said. “She’s beaten me so many times. She’s a player who knows how to beat me and knows my weaknesses better than anyone.’’

We’re HustleTweeting about The Battle of the Williams Sisters, and you’re more than welcome to join the conversation by following the Hustle on Twitter HERE or write to us directly at hustleoncrave@gmail.com Hey, have you checked out the Hustle’s Ultra High Quality You Tube Channel, with exclusive videos featuring the #HUSTLEBOOTYTEMPTATS SUPERMODEL OF THE YEAR … OUR WORLD EXCLUSIVE WITH MIKE TYSON … BROCK LESNAR’S “HERE COMES THE PAIN” … ICE-T AND COCO’s SEX SECRETS … MMA BAD BOY NICK DIAZ … the list goes on and on, so if you’re not subscribing, you’re missing something … and by the ways cheapos, it’s FREE! Yes, absolutely 100 percent FREE! What are you waiting for? Check it out HERE