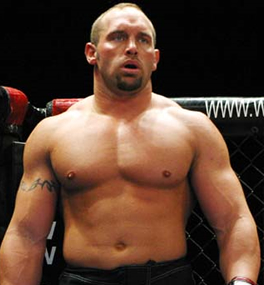 The man who was originally scheduled to headline UFC 106 against Ultimate Fight World Heavyweight Champion Brock Lesnar does not think Lesnar should be stripped of the championship.

Shane Carwin, who has been quite critical of Lesnar’s antics after pulverizing Frank Mir at UFC 100, posted a message on the popular “Underground” MMA message board regarding LESNAR’S ILLNESS AND HOSPITALIZATION.

I am sure most of you know I am not the leader of the Lesnar Fan Club. That being said, antics or not, he is OUR UFC HWT Champion. He beat a future Hall of Famer to keep that belt and he NEEDS our prayers and good thoughts right now … Brock has a wife, kid, and friends that depend on him to make their lives better. You do not have to support Brock and his antics but you should have respect for the human side of what is happening here.  Talk of stripping a man of his title due to illness will set this sport back farther then anything Brock has ever said. We need our Champions healthy and defending. I know the show will go on but to be a Champion you must beat a Champion … If you sit around bashing Brock or making fun of this because of his antics you might be the very same thing you despise. As an MMA fan, as a human be concerned that one of OUR OWN has fallen and needs our support.