Hollywood Charlie Is Live At The Shane Carwin UFC 116 Open Workout at The MGM Grand! 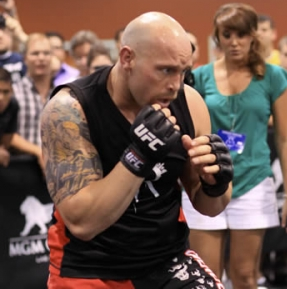 Digital Charlie is Live at the Shane Carwin UFC 116 Open Workout at the MGM Grand!

Las Vegas, Nevada — Shane Carwin held an open workout this afternoon at the MGM Grand, showing not only his hand speed, but also some grappling skills, and his stretching routine.

Carwin, the 12-0 First Round Assassin, was quite impressive in his open workout. Carwin arrived with a shaved head and looked like he will definitely need to cut weight before this Friday’s weigh-ins. Carwin looked to be in the 275-pound range, and needs to weigh in at 265 pounds this Friday. The 1999 NCAA Division II Heavyweight Champion should have no problems cutting the weight, he’s a wrestler and he has done it many times before.

THE HEYMAN HUSTLE has exclusive coverage of Carwin’s open workout, as well as all the events leading into UFC 116. We’re HustleTweeting about Shane Carwin, and you’re more than welcome to join the conversation by following the Hustle on Twitter HERE or by hitting LIKE on our hyper-interactive Facebook page HERE!