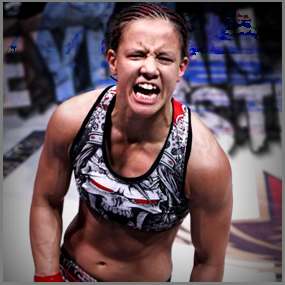 Friday, August 29, 2014 — THE HEYMAN HUSTLE was granted EXCLUSIVE access to Shayna Baszler‘s training sessions with legendary Mixed Martial Arts fighter Josh Barnett as The Four Horsewomen‘s Queen of Spades prepares for her epic grudge match tomorrow night at UFC 177 against Horsewomen Hunter Bethe Correia, who scored a unanimous decision over Jessamyn Duke at UFC 172. Jessamyn is Shayna’s stable mate in the 4 Horsewomen group along with Ronda Rousey and Marina Shafir.

After the win, Correia (8-0) held up her four fingers and dropped one of them … an old school wrestling concept when someone would start picking off The 4 Horsemen … which really pissed off Shayna and the rest of the tight nit group. Her coach, the legendary Josh Barnett appreciates the motivation but has been concentrating on Shayna’s focus on victory and victory alone. “I want to see her (get) that UFC win,” he said. “That’s what’s important and I know she’s got exactly what it takes to do so.”

Our own Hustler De Tuti Hustlers Paul Heyman dispatched MMA documentarian Ary Dalton to Downtown Los Angeles where THE HEYMAN HUSTLE was granted unprecedented access to Shayna Baszler‘s training camp. “This is going to an epic battle of fighting styles and the will of each woman,” Ary noted. “Bethe is clearly looking to pick a fight with Ronda Rousey, and Shayna is determined make sure the undefeated Brazilian suffers the same fate as The Undertaker’s Streak at WrestleMania!”

SHAYNA BASZLER DOES THE HEYMAN HUSTLE – AN EXCLUSIVE LOOK INSIDE THE QUEEN OF SPADES’ TRAINING WITH LEGENDARY MIXED MARTIAL ARTS CHAMPION JOSH BARNETT!

Of course, we’re HustleTweeting about tomorrow night’s UFC 177, and you’re more than welcome to join the conversation by following us on twitter HERE or write to us directly at hustleoncrave@gmail.com Hey, have you checked out the Hustle’s Ultra High Quality You Tube Channel, with exclusive videos featuring OUR WORLD EXCLUSIVE WITH MIKE TYSON … BROCK LESNAR’S “HERE COMES THE PAIN” … ICE-T AND COCO’s SEX SECRETS … MMA BAD BOY NICK DIAZ … the list goes on and on, so if you’re not subscribing, you’re missing something … and by the ways cheapos, it’s FREE! Yes, absolutely 100 percent FREE! What are you waiting for? Check it out HERE!