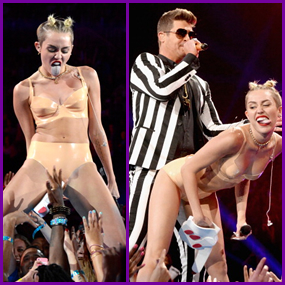 Part 2 of our MTV (Miley TV) VMA Coverage examines how the media has totally botched this story. Bitch wasn’t twerkin’! She was bumpin’ and grindin’ all over Robin Thicke’s (Un) Blurred Lines!

Just moments after MILEY CYRUS WENT ALL-OUT ON THE 2013 MTV VMAs, the pop sensation took it even further with what will go down as the raunchiest dance in MTV history. And this is coming from a staff that grew up watching those MTV shows in the mid-1990s with all the upskirt cams and boobie-shakin’ video shots! Miley danced all over Robin’s Thicke to his global sensation Blurred Lines and we, the youth of America, may never be the same again. To which we here at THE HEYMAN HUSTLE collectively say, “thanks Miley. It was sooooo worth it!”

Of course we’re HustleTweeting about Miley Cyrus, and you’re more than welcome to join the conversation by following the Hustle on Twitter HERE or by hitting LIKE on our hyper-interactive Facebook page HERE!