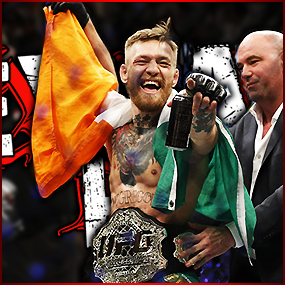 If you blinked, you missed the history making moment that defined UFC 194! 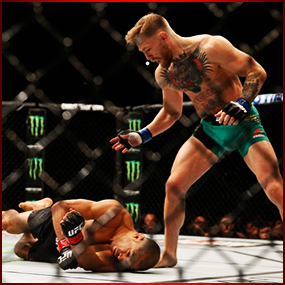 If you blinked, you missed the history making moment that defined UFC 194!

Conor McGregor lived up to every bit of self-promotion and hype imaginable, clipping Jose Aldo Junior right on the sweet spot and knocking him out in just thirteen seconds, breaking Ronda Rousey‘s record for winning a title fight (Rousey won in fourteen seconds earlier this year). It was a complete shocker, a total one punch knockout. Both McGregor and Aldo threw a punch at the same moment, but McGregor’s landed first, and cleanly, and it was lights out for Aldo. Aldo actually finished his punch and hit McGregor with a left, but it was muscle memory as his body crumbled to the canvas. It was astounding to watch that moment. McGregor pounced n top of Aldo but was immediately pulled off, as the Conor McGregor Era was already underway in UFC.

Of course, we’re HustleTweeting about Conor McGregor, and you’re more than welcome to join the conversation by following the Hustle on Twitter HERE or write to us directly at hustleoncrave@gmail.com Hey, have you checked out the Hustle’s Ultra High Quality You Tube Channel, with exclusive videos featuring the #HUSTLEBOOTYTEMPTATS SUPERMODEL OF THE YEAR … OUR WORLD EXCLUSIVE WITH MIKE TYSON … BROCK LESNAR’S “HERE COMES THE PAIN” … ICE-T AND COCO’s SEX SECRETS … MMA BAD BOY NICK DIAZ … the list goes on and on, so if you’re not subscribing, you’re missing something … and by the ways cheapos, it’s FREE! Yes, absolutely 100 percent FREE! What are you waiting for? Check it out HERE!