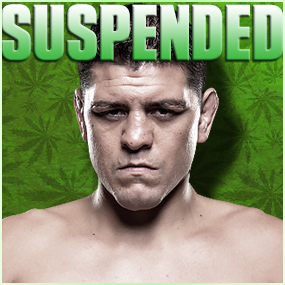 Has The Nevada State Athletic Commission Gone Too Far?

It was, by every account, a shocking ruling. The Nevada State Athletic Commission has suspended Nick Diaz for five years, a punishment the commission felt was justified because it was the third marijuana-related offense of Diaz’s career. The NSAC discussed a lifetime ban for Diaz, the controversial UFC fighter and former Strikeforce Welterweight Champion before voting unanimously on five years.NSAC commissioner Skip Avansino acknowledged during deliberations a five-year ban is essentially “a lifetime (ban) for (Diaz)” who is now 32 years old.

Diaz (26-9) appeared before the commission in person but declined to answer any of the questions the NSAC asked.  Commissioner Pat Lundvall forced Diaz to invoke his Fifth Amendment privilege against self-incrimination in the round consisting of about 30 questions.Immediately after the hearing, Diaz spoke to the media. In a rambling twelve-and-a-half minute statement, obviously unprepared, Diaz spoke from the heart.

“I’m pretty pissed,” said Diaz after the hearing. “I got into this sport for this exact reason, being stuck in a room with people like that. I wanted to tell them what I think. I wanted to tell each and every one of them they’re a bunch of dorks. Everybody who sees them or knows who they are should tell them that. I would if it weren’t for my experts advising me to keep my mouth shut. I wanted to get up and say, Look. You guys are way the fuck out of line!”

“Those people are nothing but a bunch of crooks up there,” Diaz exclaimed. “The reason why I became a fighter, on top of a handful of reasons, was so that I don’t have to break the law. People around me in my community, people I know, they don’t have to break the law either. We even did a lot of good. They got me in here sweating bullets in a freaking court room with my lawyers because they all think I’m going to flip out and do something really nuts like I was about this close to doing. I just think that it’s bullshit. I’ll fight anybody in this whole sport. I’ll beat everybody that … I’ve already beat guys that are on the top right now. This is the sort of reason that people don’t understand that I’m the best fighter in the world. They don’t understand that.”

Diaz can’t even corner his brother Nate when Nate fights in the Octagon. Commented Nick, “My brother has a fight coming up; are you going to tell me I can’t even go corner my brother when he goes in? This isn’t a sport, this is war; this is warfare. This is a war game. He’s going in there to fight for his life and I can’t even go stand next to him?”

Diaz initially suffered a unanimous decision loss to Anderson Silva at UFC 183. However, Silva also tested positive for banned substances around the event. Silva’s drug tests were not for marijuana likes Diaz’s, though, but rather a variety of anabolic steroids.So the NSAC fined Silva $380,000, the fight result changed to a no-contest, and Silva received a one-year-suspension. Diaz addressed that as well, stating,  “I never did steroids in my life; that’s another thing I’ll tell you right now. I know all the fighters and they’re all on steroids. All you motherfuckers are on steroids. All you motherfuckers, all of you are on steroids. I already know that. I’m the only person in this sport, for the most part, that ain’t on steroids. Now there’s new rules in effect and there’s guys who aren’t on steroids now, but they used to be. They’ve always been on steroids. I’ve never been on steroids and I didn’t break the rules now!”

We would love you to join the conversation about this controversial topic, as our HustleTweeters are already deep into the banter. So please feel free to be part of the discussion by following the Hustle on Twitter HERE or write to us directly at hustleoncrave@gmail.com Hey, have you checked out the Hustle’s Ultra High Quality You Tube Channel, with exclusive videos featuring the #HUSTLEBOOTYTEMPTATS SUPERMODEL OF THE YEAR … OUR WORLD EXCLUSIVE WITH MIKE TYSON … BROCK LESNAR’S “HERE COMES THE PAIN” … ICE-T AND COCO’s SEX SECRETS … MMA BAD BOY NICK DIAZ … the list goes on and on, so if you’re not subscribing, you’re missing something … and by the ways cheapos, it’s FREE! Yes, absolutely 100 percent FREE! What are you waiting for? Check it out HERE

CHECK OUT NICK DIAZ ON THE HEYMAN HUSTLE!