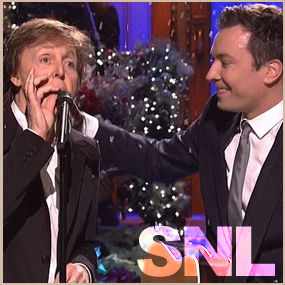 Saturday Night Live heads into 2014 with more momentum than anyone can ever remember after the Jimmy Fallon and Justin Timberlake host cameos by Madonna, Mayor Bloomberg, Barry Gibb from the Bee Gees and a certain ex-Beatle!

NBC scored HUGE with the final Saturday Night Live of 2013 as guest host Jimmy Fallon (who got his big break as a regular on the show) got ready to take over The Tonight Show from Jay Leno by turning in one of the all time great host-performances alongside music guest (and frequent skit contributor) Justin Timberlake. The show was filled with special guest cameos, as Mayor Bloomberg came on Weekend Update … Madonna talked politics … “Bee Gee” Barry Gibb joined a skit about his brothers … and the monologue, which saw Fallon claim he was going to perform with David Bowie, Bob Dylan and Paul McCartney .. but they were all stuck in traffic and couldn’t make it. Fallon stated that the show must go on, however, so Fallon performed some of his famous musical impersonations to sing their parts.

When Fallon started to impersonate ex-Beatle Paul McCartney, the audience exploded as McCartney himself joined Fallon on stage. Of course, we’re HustleTweeting about Saturday Night Live, and you’re more than welcome to join us by following THE HEYMAN HUSTLE and telling us what YOU think RIGHT F’N HERE! We got the whole social media thing covered, so check out the Hustle’s Ultra High Quality You Tube Channel, with exclusive videos featuring OUR WORLD EXCLUSIVE WITH MIKE TYSON … BROCK LESNAR’S “HERE COMES THE PAIN” … ICE-T AND COCO’s SEX SECRETS … TEEN SENSATION TAYLOR MOMSEN … UFC BAD BOY NICK DIAZ … THE WALKING RIOT MISSY HYATT if you’re not subscribing, you’re missing something … and by the ways cheapos, it’s FREE! Yes, absolutely 100 percent FREE! What are you waiting for? Check it out HERE! 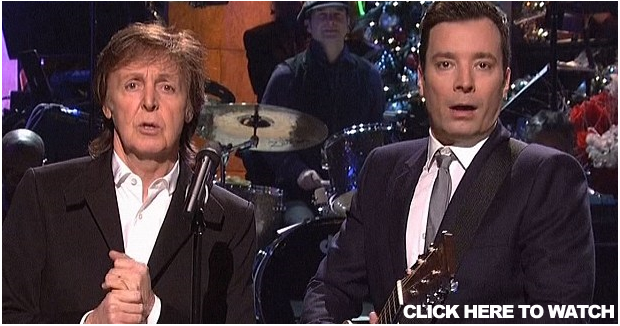