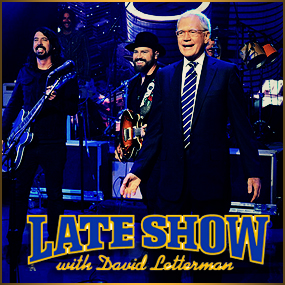 It’s a very emotional farewell … but it’s not Dave who closes the one hour seventeen minute show!

THIS REPORT IS BEING FILED LIVE FROM THE ED SULLIVAN THEATRE IN NEW YORK CITY BY THE HEYMAN HUSTLE’S VERY OWN DIGITAL CHARLIE:

“The Late Show with David Letterman” wrapped up its run on CBS with an emotional one hour seventeen minute broadcast tonight. There were no tears from Letterman, but the sign-off moment was emotional, especially for his longtime staffers and the lucky fans who were inside the Ed Sullivan Theater for the finale. Before the taping began, Letterman called it “the most important show of my life.” CBS Corporation CEO Les Moonves came on stage to thank Letterman.

Get this … Four former presidents and President Obama appeared via videotape in a hysterical tribute. Letterman’s wife Regina and son Harry were in the audience for the comedian’s closing monologue. The lights in the theater came up to acknowledge their presence. Conan O’Brien, the man who took over for Letterman on NBC’s “Late Night,” also aired a show on Wednesday night, but told viewers to instead watch Letterman. “Trust me, I want you to record this show,” O’Brien said. “But please switch over and watch Dave.”

O’Brien wasn’t the only host that told viewers to change the channel. Jimmy Kimmel, made the decision not to offer a live show tonight on ABC, encouraging viewers to watch Letterman instead.

When it was time to close, Letterman’s farewell speech was dynamite. He then then walked backstage as the Foo Fighters closed out the show with a performance of “Everlong.”

Of course, we’re HustleTweeting about David Letterman’s final show, and you’re more than welcome join the conversation by following The Heyman Hustle on Twitter HERE! You can also post your thoughts on our Facebook page HERE!  If you feel compelled to write us, please do so at HustleOnCrave (at) Gmail.com