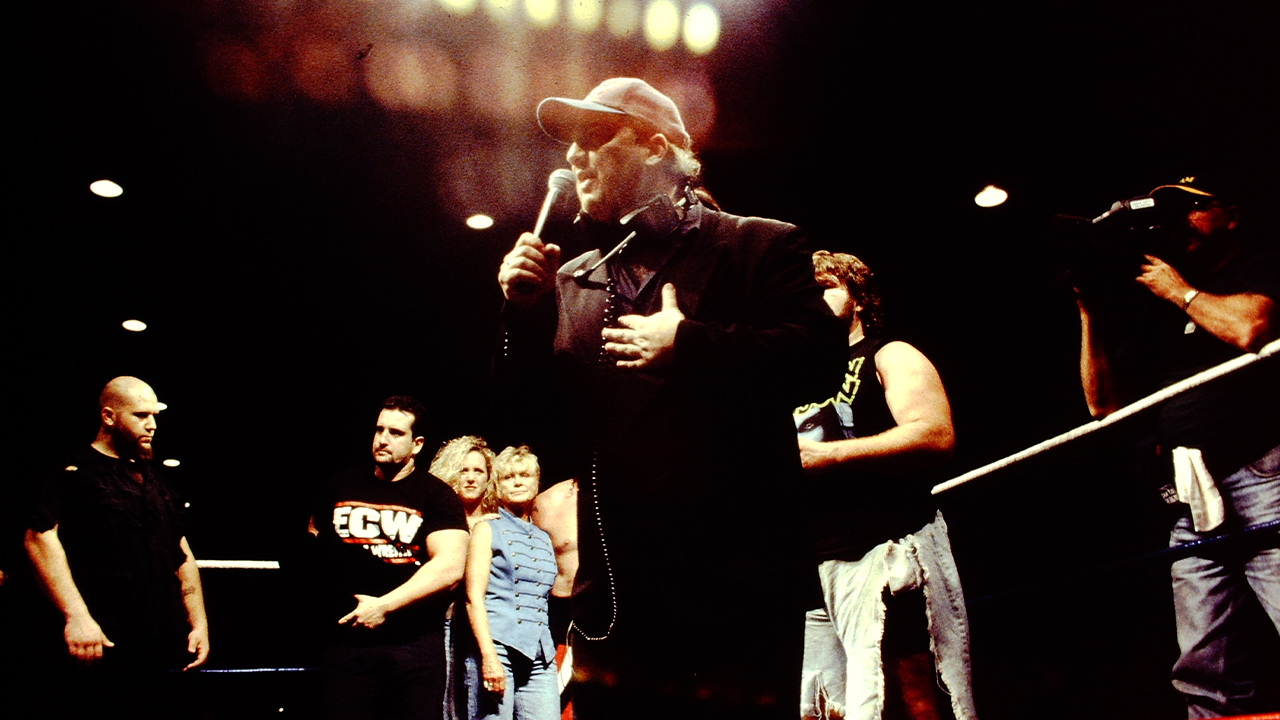 Our boss Paul Heyman was interview by Justin Barrasso of Sports Illustrated about the enormous legacy that is the legend of ECW, and the A&E documentaries that have become Must-See TV.

Now entering his fifth decade in pro wrestling, Heyman has carved out a distinct legacy. He laid the groundwork of his future as a vastly underrated manager in WCW, later returning to an evolved version of the role, most notably with Lesnar and Reigns. He has found success—and yes, plenty of controversy—at every stop along the way, carving out an iconic legacy as the chief operating officer of Extreme Championship Wrestling during the mid-1990s. That will be the reason for Heyman’s appearance this Sunday on A&E’s WWE Rivals, where he will share a perspective unlike any other of the WWE-WCW battles during the famed “Monday Night Wars” era.

Heyman played an integral role in that battle, but it wasn’t because he was airing a competing show on Monday nights. Oftentimes, you couldn’t find ECW on the air until two or three in the morning. Long before DVR, it took a leap of faith to trust your VCR to record as it was programmed in hopes that you would witness an uncut, uncensored and extreme version of pro wrestling.

“What was it like competing in the single most hyper-competitive environment in the history of this industry?” Heyman says. “With absolutely no sponsors, no advertisers, no big money-backers or trust-funds behind me? It was exhilarating.”

ECW was a constant factor in determining the hot hand in the weekly WWE-WCW battle for wrestling supremacy. That was partially because, at first, it appeared that the talent imported from ECW would sway ratings. When Public Enemy and Sabu signed with WCW, or when “The Franchise” Shane Douglas left for greener pastures and the chance to benefit from the brilliant mind of Vince McMahon, there was no doubt that the slow death of ECW was coming faster than expected. Yet an unexpected turn of events shaped the entire next generation of pro wrestling. It wasn’t solely the wrestlers that would define the Monday Night Raw–Nitro fight, but rather the attitude. ECW, led by Heyman and a phenomenally talented, evolving roster, brought the industry to the extreme. In terms of content and athleticism, ECW still stands as a blueprint for every major wrestling promotion in North America, especially WWE and AEW.

“My role was not to be a dollar-for-dollar competitor,” Heyman says. “My role was to be the disruptor, to be the catalyst for change in the business. I understood it. I also understood that history was going to view ECW as a cause and not a business, and ultimately, we would fall victim to that designation and stigma because it would become a self-fulfilling prophecy. There was no way we were ever going to survive fighting two billion-dollar corporations with no money, no muscle, and no mouthpiece. All we had was balls, bulls— and bravado.

“In my 35 years as an orator, I’ve yet to find a sound bite better than Bubba Ray Dudley, who said we were Napster. We weren’t meant to survive. We were meant to disrupt. We were a cause, one that is still seeing its ideas implemented and exploited and benefitting an industry. That is who we were, the disrupters, with a Faustian zeal, of an entire generation.”

There is no shortage of “Paul Heyman Guys” in wrestling, with Steve Austin and The Undertaker leading the pack. Yet one would be hard-pressed to find anyone associated more closely on-screen with Heyman than Lesnar or now Reigns, a pairing that has exceeded all expectations.

“I understand the level of greatness both of those men can achieve,” Heyman says. “I’ve had the easiest job the last 20 years. Look at who I get to hype. Yet as much as I hype them, I still under-promise and they still over-deliver.”

The single biggest misconception of ECW is that it was all blood, guts and nudity. While those were all prominent features of the brand, it would never have endured had there only been style without substance. The backbone of ECW was its wrestling, whether that be presented by Rey Mysterio, Dean Malenko, Chris Jericho, Tommy Dreamer, Too Cold Scorpio, Bam Bam Bigelow, Mick Foley, Mikey Whipwreck, The Great Sasuke, Lance Storm, Psicosis or the aforementioned stars like Van Dam, the Dudleys, Sabu and Taz. That gave the promotion a heartbeat, vindication for all the wrestling fans who had grown frustrated by a product that no longer appealed to them. And ECW wouldn’t have—and couldn’t have—been ECW without the legendary, timeless Funk, who would have created a masterpiece against either Reigns or Lesnar.

“Terry Funk was a completely different style,” Heyman says. “He was genius at performing into the vision and expectations of the crowd he was performing for. The bar, the standard for classic professional wrestling, in the terms of grappling, remains Flair vs. Steamboat and the Briscos vs. the Funks. As much as Terry Funk’s reputation is heralded for his wild antics, he was also one of the great mat technicians of his era that could credibly go 60 minutes with Jack Brisco anywhere in the world. And when Terry Funk was paired against Jack Brisco, that was the performance he delivered. When Terry Funk was paired with Harley Race, you saw a down-and-dirty, bare knuckle drag-out brawl. When Terry Funk was paired with Ric Flair, you saw the wild-man antics of Terry Funk against the purity and fluidity and the finesse of Ric Flair.

“What Terry Funk was great at was understanding what people paid to see. He didn’t define any particular role. He mastered them all. So anybody against Terry Funk would be great, because he would make it great.”

There is no known means for traveling through time, but there is a compelling alternative. Heyman’s presence on Sunday’s Rivals will provide an illuminating view of the past, present and future of pro wrestling, all through the lens of its most cutting-edge mind.

“I’m going to bring light to a portion of history that A&E is doing a Biography on,” Heyman says. “So far, I’ve been blown away by the quality and the narrative that has been told on these A&E Biographies. I answered truthfully for historical purposes, and to A&E’s massive credit, they hired some top flight directors to present these narratives.”

Heyman’s longevity is remarkable, and so is his ability to tell a story. The two connect, irrevocably, and that will be on display this weekend. Only days after Lesnar, Reigns, Heyman, The Usos and referee Chad Patton received a backstage standing ovation from their peers at SummerSlam in sincere appreciation for the classic match that was presented, viewers now have the opportunity to learn how the past became the present. Though the backstage ovation was a topic that Heyman would not discuss, he will not hold back this Sunday on Rivals.

“These episodes are of such high quality,” Heyman says. “If they’re not nominated for Emmys, something is wrong here.”

We’re HustleTweeting about ECW and A&E Biography, and you’re more than welcome to join the conversation on the Hustle Twitter HERE … on our ridiculously sensational Instagram HERE … or on our Facebook page HERE!