Stacy Keibler Becomes a Household Name at The Academy Awards 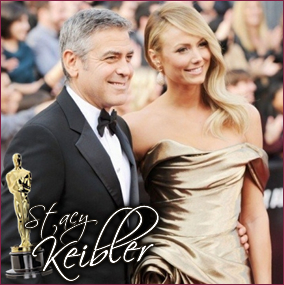 The Baltimore Beauty Goes From Being “Former WWE Diva” To A Stunning Vision on George Clooney’s Arm Who Stole The Red Carpet at The Oscars 2012! 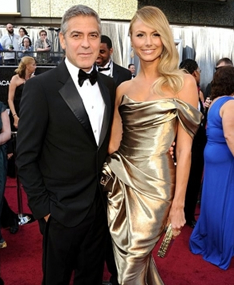 The Baltimore Beauty Goes From Being “Former WWE Diva” To A Stunning Vision on George Clooney’s Arm Who Stole The Red Carpet at The Oscars 2012!

Stacy Keibler has stepped out of the “hot sex symbol with those killer legs” category and into superstardom. Tonight, the former Baltimore Ravens cheerleader – turned – WCW Nitro Girl – turned – WWE Diva – turned – Dancing With The Stars reality show breakthrough celebrity became a household name with her show-stealing appearance alongside Oscar nominee George Clooney on the red carpet at the 2012 Academy Awards.

“I love when they say ‘Who are you wearing?’ … You’re carrying someone on your back,” Clooney joked with E!’s Ryan Seacrest. The actor, who always seems to be joking around on the carpet, later revealed he was wearing a tuxedo by Giorgio Armani, while Keibler was decked out in a gold Marchesa gown, along with Judith Leiber and Lorraine Schwartz accessories.

CLICK HERE FOR THE HEYMAN HUSTLE’S EXCLUSIVE PHOTOS OF STACY KEIBLER ALONG WITH SUPER MODEL BAR REFAELI AT THE MARCHESA SHOW DURING NEW YORK FASHION WEEK!

CLICK HERE FOR THE 50 (YES, FIFTY!!!) SEXIEST PHOTOS EVER TAKEN OF STACY KEIBLER DURING HER TIME IN THE WORLD OF PROFESSIONAL WRESTLING!

Clooney chatted with Seacrest about his film, “The Descendants,” saying how lucky he was to be able to work with director Alexander Payne.

“She’s 7 feet tall. What’s she afraid of?” Clooney laughed. “(Stacy)’s afraid of low-flying planes … She hit her head on the blimp.”

Of course we’re HustleTweeting about Stacy Keibler on the red carpet tonight, and you’re more than welcome to join the conversation by following THE HEYMAN HUSTLE on Twitter HERE or write to us directly at hustleoncrave@gmail.com  Hey, have you checked out the Hustle’s Ultra High Quality You Tube Channel, with  exclusive videos featuring BROCK LESNAR’S “HERE COMES THE PAIN”  … ICE-T AND COCO’s SEX SECRETS … THE ULTIMATE WELTERWEIGHT BAD ASS NICK DIAZ … CONTROVERSIAL TEEN SENSATION TAYLOR MOMSEN … LEGENDARY MMA PIONEER FRANK SHAMROCK … THE WALKING RIOT MISSY HYATT … if you’re not subscribing, you’re missing something … and by the ways cheapos, it’s FREE! Yes, absolutely 100 percent FREE! What are you waiting for? Check it out HERE!

CLICK ON THE PICS BELOW TO SEE THE ENTIRE GALLERY FEATURING
STACY KEIBLER’S WALK INTO HOLLYWOOD FAME AT THE ACADEMY AWARDS!