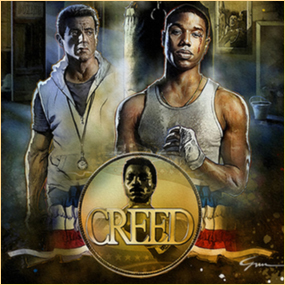 38 Years After He Introduced Us to Rocky Balboa, Stallone Grooms The Next Movie Franchise!

Sylvester Stallone knocked out the Internet this weekend by sharing the first official photo from Warner Bros.Pictures and MGM’s upcoming Rocky spin-off, “Creed” … and if Sly was looking for some buzz, he certainly got it! Adonis Johnson (played by Michael B. Jordan) never knew his famous father, World Heavyweight Boxing Champion Apollo Creed, who died at the hands of Ivan Drago before he was born. Adonis heads to Philadelphia, the site of Apollo Creed’s legendary match with a tough upstart named Rocky Balboa. The second generation pugilist tracks down Rocky and asks him to be his trainer. Rocky trains the young fighter, but there is a serious conflict in Rocky’s life, which is his health.

Of course, we’re HustleTweeting about Creed, and you’re more than welcome to join the conversation following The Heyman Hustle on Twitter HERE! You can also post your thoughts on our Facebook page HERE!  If you feel compelled to write us, please do so at HustleOnCrave (at) Gmail.com

Get ready to go for it!