Tanaka Steps Up And Shoots 'em Down 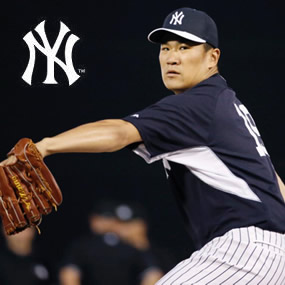 The Bronx Bombers Skin The Marlins as The Pre-Season Comes To an End!

Masahiro Tanaka struck out 10 and pitcherd six scoreless innings in relief of Hiroki Kuroda as The New York Yankees shutout the Marlins 3-0 win on Friday night.

This was Tanaka’s last pre-season appearance, as the next time he will appear it will be for keeps. The 2014 MLB season is upon us!

In regards to both Kuroda and Tanaka, Yankees Manager Joe Giraldi stated “They both did what you want to see in their last outing … I thought they both were really good.”

Tanaka has been stellar, as he has given up five runs and struck out 26 over 21 innings for a 2.14 ERA in 5 exhibition games. The right handed pitcher signed a staggering $155 million, seven-year contract in January. He was … get ready for this … 24-0 with a 1.27 ERA last year while leading Rakuten to its first Japan Series title.

So, when will Tanaka (who has been named the recipient of the James P. Dawson Award as the Yankees’ top rookie in camp)  kick ass in an official MLB game? You’re going to have to wait a week, when he is expected to start for the Yankees in their fourth game of the season, next Friday April 4th in Toronto.

Of course, we’re HustleTweeting about The New York Yankees, and you’re more than welcome to join the conversation (and you have to realize, this is one ridiculously lively conversation) by writing us on twitter HERE or write to us directly at hustleoncrave@gmail.com  Hey, have you checked out the Hustle’s Ultra High Quality You Tube Channel, with exclusive videos featuring OUR WORLD EXCLUSIVE WITH MIKE TYSON … BROCK LESNAR’S “HERE COMES THE PAIN” … ICE-T AND COCO’s SEX SECRETS … MMA BAD BOY NICK DIAZ … the list goes on and on, so if you’re not subscribing, you’re missing something … and by the ways cheapos, it’s FREE! Yes, absolutely 100 percent FREE! What are you waiting for? Check it out HERE!