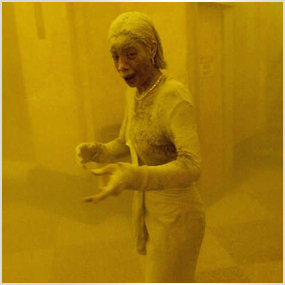 Weeks before the anniversary of the September 11th Attacks, a reminder of the long term damage of that fateful day in New York City!

Marcy Borders, a 42 year old woman who was photographed (at the age of 28) covered in dust in a building lobby on September 11, 2001 has passed away. When the 9/11 Attacks occurred, Marcy had only worked at Bank of America for a month, and happened to be late getting to work on the 81st floor of the North Tower that morning.

“Hundreds of people were trying to get out,” she recalled ten years later. “My stairwell was badly damaged and we had to move stairwells, I was convinced we were going to die. I’m so glad I had the strength to get to the bottom. There were wounded and the injured, it was too much for one to witness. I saw people with things sticking out of them, covered head to toe in blood. I couldn’t understand it. What I saw was carnage, and I thought, ‘God, I’m going to die anyway.'”

Fourteen years later, she has died of stomach cancer, at the age of 42. Her cousin John Borders wrote on Facebook, “In addition to losing so many friends, coworkers, and colleagues on and after that tragic day … the pain from yesteryear has found a way to resurface.”

Last year, Ms. Borders told The Jersey Journal that she hated looking at the iconic photograph. “I try to take myself from being a victim to being a survivor now. I don’t want to be a victim anymore.”

After surviving the terror attack, Borders fell into a deep depression. In an interview with the New York Post, Ms. Borders stated, “My life spiraled out of control. I didn’t do a day’s work in nearly 10 years, and by 2011 I was a complete mess … Every time I saw an aircraft, I panicked. If I saw a man on a building, I was convinced he was going to shoot me. I started smoking crack cocaine, because I didn’t want to live.”

Ms. Borders wondered if her cancer had anything to do with the dust and debris she inhaled that day. She stated,  “I’m saying to myself … did this thing ignite cancer cells in me?’ I definitely believe it ­because I haven’t had any illnesses. I don’t have high blood pressure … high cholesterol, diabetes.”

Last year, Ms. Borders told the media that she was paying off $190,000 in medical bills and had no insurance. Nearly 4,000 people survivors and first responders have died of Cancer since the attacks on September 11, 2001.