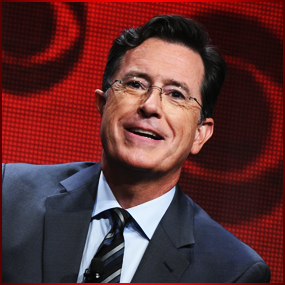 The Incoming “Late Show” Host is Ready to Take On Donald Trump!

Stephen Colbert is aching to take over the “Late Show” for many reasons, the key one being that he wants to take on Donald Trump! Colbert officially succeeds David Letterman as host of the CBS program on September 8th, and the incoming host addressed his new job at the Television Critics Association summer press tour in Beverly Hills on Monday. “I want to do jokes on Donald Trump so badly and I have no venue,” Colbert noted. “So right now I’m just dry-Trumping.”

Colbert added, “Every night before I go to bed, I light a candle and pray that he stays in the race. And I also pray that no one puts that candle anywhere near his hair.”

We’re HustleTweeting about Stephen Colbert vs Donald Trump, and you’re more than welcome to join the conversation by following the Hustle on Twitter HERE or write to us directly at hustleoncrave@gmail.com Hey, have you checked out the Hustle’s Ultra High Quality You Tube Channel, with exclusive videos featuring the #HUSTLEBOOTYTEMPTATS SUPERMODEL OF THE YEAR … OUR WORLD EXCLUSIVE WITH MIKE TYSON … BROCK LESNAR’S “HERE COMES THE PAIN” … ICE-T AND COCO’s SEX SECRETS … MMA BAD BOY NICK DIAZ … the list goes on and on, so if you’re not subscribing, you’re missing something … and by the ways cheapos, it’s FREE! Yes, absolutely 100 percent FREE! What are you waiting for? Check it out HERE